“Renewed” from Christian Faith Publishing author Louis Saffell is a gripping life story of a young man with different disabilities raised by a very abusive family who keeps on telling him he’s not trying hard enough to function and the emptiness he feels until his life changes completely after a prayer meeting. 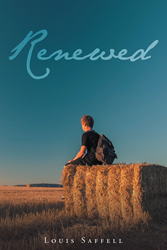 “Renewed”: a stirring book on how a disabled person who feels alone in his inner battles and does not voice out his struggles in life is redeemed by God. “Renewed” is the creation of published author, Louis Saffell, the owner and operator of the Easton Cabinet Shop for twenty-four years.

Louis shares, “It was a long haul in recovery. I could only have one teaspoon of liquid at a time. Finally, I ate a little soup. Every time I was able to keep something down, I was given a little more. I started walking to the bathroom without help. Then I was finally able to walk to the dinner table. I have a very clear memory of the first day I walked from the house to the barn. My right foot turned out very badly. As hard as I tried, it wouldn’t go straight. Being a cripple, I was not going to be. It took several years of concentration and hard work, and I was walking straight. I had lost four months of schooling. I was in the seventh grade.”

Published by Christian Faith Publishing, Louis Saffell’s new book features a life story as honestly as possible, including the people who influenced a man to change from being someone who lives in fear and hopelessness to being a brave, hopeful, and vibrant individual.

The book also covers a young man’s early childhood and teenage life, exposing a bigger picture that how other people treats a person affects his character and attitude—including his or her emotional stability. This story is also an encouragement for those who feel like success is far from reach because of their circumstances and conditions.

For additional information or inquiries about “Renewed”, contact the Christian Faith Publishing media department at 866-554-0919.