Lusk's presentation at the World Food Prize side event focused on optimistic, proactive messages about agriculture, science, and technology 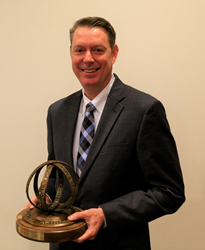 For the eighth year in a row, the winner of the Borlaug CAST Communication Award (BCCA) was honored at a World Food Prize side event, and this year's recipient--Jayson Lusk--gave an insightful keynote address about "The Future of Food."

A Distinguished Professor and head of the Department of Agricultural Economics at Purdue University, Dr. Lusk achieved a B.S. in food technology from Texas Tech. Before diving into academic work at Mississippi State, Oklahoma State, and now Purdue, he obtained his Ph.D in agricultural economics from Kansas State. In 2015, Lusk was named a fellow of the Agricultural and Applied Economics Association, and he has served on councils, chaired committees, written extensively, and become a valued voice in the realm of agricultural sciences.

Recipients of CAST's annual award are science/ag experts who demonstrate an ability to communicate through written material, public presentations, and various forms of media. Lusk is a consummate communicator who promotes agricultural science and technology in the public arena using multiple forms of media to advocate for science. His blog explores how innovation and growth in agriculture are critical for food security and global progress. His most recent book, "Unnaturally Delicious: How Science and Technology Are Serving Up Super Foods to Save the World," explains how science and innovation are linked with feeding the growing global population. As one nominator wrote, "Lusk is an excellent columnist and blogger. His perspective is often surprising, and he engages the reader."

After a breakfast sponsored by Syngenta, CAST Executive Vice President Kent Schescke and Syngenta's Dirk Drost spoke about Lusk's communication abilities and the many accomplishments that make him a perfect fit for this group of dynamic BCCA influencers. Then Julie Borlaug Larson (INARI Agriculture) spoke about her grandfather's legacy and his connections with CAST. She pointed out that Borlaug's words ring true today as much as ever. Larson praised Lusk for his communication abilities and encouraged all to "take it to the farmer, take it to the public."

Dr. Helen Jensen of Iowa State University formally introduced Jayson Lusk, and he began his presentation by pointing out that he wanted to prove "an ag economist can be an effective and stimulating communicator." He spoke of the need to consider an emerging food movement and how to engage consumers who mistrust tech and innovation. Lusk points out that productivity and sustainability have improved with tech advancements. Using facts and surveys, he showed that precision agriculture benefits us all. He then stressed the importance of considering consumers and their values when communicating with the public. In an era of misinformation and polarization, Lusk is optimistic about "the future of food."

The honor is presented annually by CAST, and this year the award was sponsored by Syngenta. Attendees included scientists, journalists, farmers from around the world, and dignitaries such as Iowa Secretary of Agriculture Bill Northey (and nominee for a USDA leadership role), Ambassador Kenneth Quinn (head of the World Food Prize), and Channapatna Prakash (Tuskegee University Dean and 2015 BCCA winner).

Visit the CAST website at http://www.cast-science.org for updated information about the award, including nomination forms for the 2018 Borlaug CAST Communication Award.

CAST, through its network of experts, assembles, interprets, and communicates credible, balanced, science-based information to policymakers, the media, the private sector, and the public.