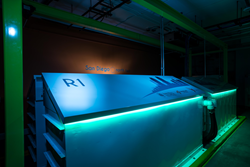 “Virtually limitless cooling, industry leading efficiency, and lower upfront cost, made it an absolute no brainer for us,” said Kevin Meziere, VP of Technology at JPCU

“Virtually limitless cooling, industry leading efficiency, and lower upfront cost, made it an absolute no brainer for us,” said Kevin Meziere, VP of Technology at JPCU “the ability to cool over 100kW [per rack] effectively and efficiently, gives us the ability to be more responsive to future technology trends and adopt more powerful hardware without concerns of cooling capacity and costs. Being a downtown campus every square inch counts, so the ability more densely pack equipment is a huge win.”

By using the CarnotJet system, JPCU found a way to minimize upfront construction costs. By adding server capacity in previously vacant, unconditioned space they were able to avoid costs related to constructing an engineered building with raised floors, aisle containment, thermal engineering, etc. The CarnotJet system uses a dielectric liquid called ElectroSafe to cool the servers, eliminating the need for traditional air conditioning and the systems that support it. The adoption of GRC’s system resulted in JPCU reducing server energy usage by close to 20%, and cooling energy by over 90%.

“IoT, Artificial Intelligence, Machine Learning, and Virtual Reality are just a few of the HPC applications that are demanding more powerful systems. Many customers deploying these powerful systems have exceeded the limits of conventional cooling and are turning to alternatives, like liquid immersion. Further, we see customers seeking to eliminate complexity and increase their speed to deployment with a more integrated approach towards IT and infrastructure,” said Peter Poulin, CEO at Green Revolution Cooling “Our partnerships with OEMs such as Supermicro enable us to deliver those integrated solutions with a compelling economic benefit.”

JPCU employed the use of Immersion optimized, Minimus servers to cut hardware costs and create custom server configurations that align with their exact needs. Minimus Servers are designed to exploit the cost & performance benefits of immersion cooling and offer JPCU the opportunity to create a system expressly made for high density computing tasks.

The combination of industry standard components from Supermicro and the limitless cooling capacity of GRC’s immersion cooling system results in a cluster on the leading edge of performance and efficiency.

About GRC
Green Revolution Cooling is the leader in the liquid immersion cooling market for data centers. GRC’s CarnotJet System, a rack-based immersion cooling system for servers, uses a dielectric fluid as the coolant that eliminates the need for chillers, air conditioners, and air handlers. Thereby, helping cut data center construction costs by up to 60%, while reducing data center cooling energy by up to 90%. GRC’s solutions have helped some of the largest cloud, HPC, and telecom organizations build extremely efficient, cost effective, and resilient data centers across the globe. Visit http://www.grcooling.com for more information.