Author W. D. Welch’s Newly Released “The End of a Dream” Is The Story Of An Iranian-American Businessman Whose Perfect Life And Family Is Destroyed By His Deceit

“The End of a Dream” from Christian Faith Publishing author W. D. Welch is the story of a young businessman who migrates from Iran in 1975 to the United States with his wife. After the economy fails him and he resorts to dishonesty, a dream quickly becomes a nightmare with a tragic end for his beautiful wife and children. 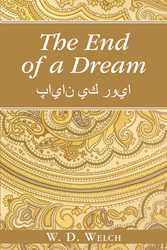 “The End of a Dream”: a story of an American Dream lost to economic hardship and a businessman’s deceitful ways. “The End of a Dream” is the creation of published author, W. D. Welch, an experienced real estate broker with a heart for her clients. Because her husband was a member of the USAF, she was able to travel to many places where she enjoyed a multitude of experiences. She decided to go into real estate when her husband left the military and started working for HP. She has owned her own real estate business for forty years. She raised two wonderful daughters and helped raise three grandchildren.

“As you read this book, you will see how real estate is in regard to becoming very involved in the lives of clients. They become like family.” --W. D. Welch

Published by Christian Faith Publishing, W. D. Welch’s new book is the story of an Iranian-American family that has it all until their fortunes change.

Amir was born in Tehran, Iran. He was not Muslim. His parents sent him to the USA to obtain an education from a school near San Francisco. He received a degree in engineering and decided to go back to Iran where he married the girl his mother wanted him to marry. Aliyeh Zhila was a twenty-two-year-old woman who was beautiful and talented. She had received an art degree in oils and pastels. Aliyeh was in love with Amir. Aliyeh was so excited to marry such a worldly man at their big Zoroastrian wedding.

She was excited, because she knew their future was in the United States of America. She had many dreams. Amir told her that he would help with her career. When the plane landed in San Francisco, she felt like she was floating on air. She would now have a big house and she was thrilled to see the new home that had been bought for them. She knew her future was going to be wonderful. Things would not, however, go as Aliyeh had dreamed.

View a synopsis of “The End of a Dream” on YouTube.

Consumers can purchase “The End of a Dream” at traditional brick & mortar bookstores, or online at Amazon.com, Apple iTunes store, Kobo or Barnes and Noble.

For additional information or inquiries about “The End of a Dream”, contact the Christian Faith Publishing media department at 866-554-0919.