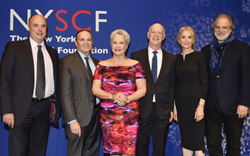 The NYSCF Science Fair & Gala serves as way to showcase the latest breakthroughs in the research, discoveries and technologies done by the many scientists and physicians who are part of the foundation. Guests had the opportunity to engage with NYSCF’s scientists and learn firsthand about the critical research their support is funding.

“I am honored to be the recipient of this year’s Leadership Award,” said Dr. Geronemus. “The importance of stem cell research cannot be understated. I will continue to work alongside the NYSCF with the goal that the research we provide will help those with severe and currently untreatable or incurable conditions.”

NYSCF’s mission of using stem cell research is to continue to investigate the use of stem cells in an effort to cure major diseases. NYSCF supports its own laboratory and collaborative research throughout the world. NYSCF has created not only foundational tools for using stem cells in basic research, but also pioneering technologies that will allow stem cells to be used therapeutically.

Dr. Geronemus is world renowned for his work in laser treatments and research. He is the Director of the Laser & Skin Surgery Center of New York, and specializes in laser procedures, cosmetic dermatology and Mohs micrographic surgery for the treatment of skin cancer. The American Society for Laser Medicine and Surgery awarded Dr. Geronemus with the Ellet Drake award for outstanding contributions to laser medicine and the Leon Goldman award for excellence in clinical laser research. He has been listed in New York Magazine’s Best Doctors in New York 20 times, 10 times as one of the Best Doctors in America, and was acknowledged as Allure magazines “Influencer” in 2013.