Ronald Nichols’s Newly Released “Making Lemonade from Life’s Lemons” is a Raw, Poignant Account of Traumatic Life Events and How They were Overcome Through God's Grace

“Making Lemonade from Life’s Lemons” from Christian Faith Publishing author Ronald Nichols is a touching and powerful autobiography that chronicles the traumatic life events that lead to addiction, arrest, and hopelessness. Through his detailed narration of the painful journey to redemption, he demonstrates that God has a plan for everyone. 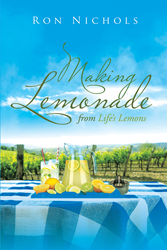 “I had a choice to either be a victim or be the victor,” Ronald writes. “As I get older, I choose to be the victor because the Greater One lives in me.”

Published by Christian Faith Publishing, Ronald Nichols’s new book chronicles his life from birth to present. The author gives a raw account of some traumatic events in his past and how he overcame them, through God’s grace and mercy, and the loving support of his wife.

Ronald gives detailed accounts of his difficult childhood, and his struggles with various addictions that began at a young age. Joining Army at 17 to escape his problems, he found that they came back to haunt him wherever he went.

After going back to the Army as a Reservist and traveling to foreign countries, he found that his drug addiction began to take control of him. When he defended his friend’s honor and served time in jail as a result, his life finally changed when he met the woman he would marry, and she led him to Christ.

View a synopsis of “Making Lemonade from Life’s Lemons” on YouTube.

For additional information or inquiries about “Making Lemonade from Life’s Lemons”, contact the Christian Faith Publishing media department at 866-554-0919.