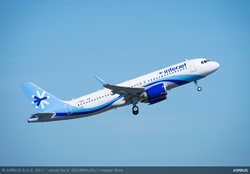 “These new, international flights are important to Interjet as they will complement our ever-expanding network offering leisure and business travelers more destinations to choose from when traveling to Mexico from the U.S.,” said José Luis Garza, Chief Executive Officer, Interjet.

Interjet, recently named the TripAdvisor 2017 Travelers’ Choice winner as the best Mexican airline, has launched a special sale for these new flights from Los Angeles with round-trip fares starting at $199.00 to Los Cabos and $259.00 to Puerto Vallarta and El Bajío. This sale ends January 17th, 2018 and prices include all applicable taxes.

In addition to these low introductory fares, Interjet offers more legroom between seats, inflight service that includes free light snacks and drinks, no fees for checked baggage on specific fares and female-only lavatories. Interjet’s new Los Angeles service will be operated using Airbus A320 aircraft with 150 seats. The initial schedule from Los Angeles will be for three frequencies per week to Los Cabos, four flights a week to Puerto Vallarta and daily service to El Bajio, all at convenient departure times.

For more information regarding these new flights or to make a reservation, visit http://www.interjet.com or in the U.S, call 1-866-285-9525.