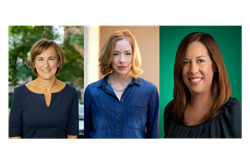 Bright Pink is honored to welcome these incredible, seasoned leaders onto our Board of Directors. Janet, Tara and Stacey's expertise will be invaluable as we strategically grow Bright Pink to reach and impact even more young women nationwide.

Bright Pink®, a national breast and ovarian health non-profit, announced today that Janet Foutty, Tara Montgomery, and Stacey Wexler have been appointed to the organization’s Board of Directors.

Janet Foutty is Chairman and Chief Executive Officer of Deloitte Consulting, LLP. Over her 25-year career, Janet has worked closely with her clients to deliver insights and innovative solutions to address their toughest issues. Based in Chicago, Janet previously led Deloitte’s federal practice that is dedicated to improving the efficacy and efficiency of U.S. government agencies. Preceding that role, she led Deloitte Consulting’s technology practice, which notably launched several businesses including Deloitte Digital.

Tara Montgomery serves as Executive Vice President, Head of Unscripted Programming for OWN: Oprah Winfrey Network, overseeing non-scripted and all Oprah branded content. Prior to her work for OWN, Montgomery served as executive producer of OWN’s popular flagship series “Super Soul Sunday” and “Oprah’s Next Chapter”, a weekly primetime series that helped launch the network, in addition to serving as the supervising producer of “The Oprah Winfrey Show” during her 16-year tenure.

Stacey Wexler is Vice President of Legal at Google Inc., overseeing areas including privacy, law enforcement and information security, competition, communications, and legal online operations. She was previously Director of Litigation, Employment, and Discovery. Prior to joining Google, Stacey was a partner at Keker & Van Nest in San Francisco.

“Bright Pink is honored to welcome these incredible, seasoned leaders onto our Board of Directors,” says Bright Pink Founder and Board Chair, Lindsay Avner. “Janet, Tara and Stacey's expertise will be invaluable as we strategically grow Bright Pink to reach and impact even more young women nationwide with our life-saving breast and ovarian health programs."

These additions to Bright Pink’s Board of Directors signal transition and growth for the 10-year old nonprofit organization headquartered in Chicago. In May of 2017, the organization’s Founder, Lindsay Avner, retired from her role as CEO to become Board Chair, and welcomed new CEO Katie Thiede, formerly VP of Development at Planned Parenthood of Illinois. Thiede oversees a $3.2 million operating budget, a staff of 15 and a national network of 150 ambassadors to deliver Bright Pink’s programming through in-person workshops and award-winning digital tools.