AxioMed announces details of its lateral total disc replacement, just weeks after closing its first round of investing and opening a second round of $10 million. 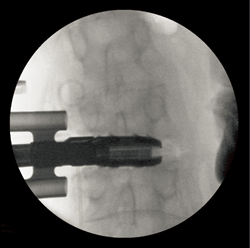 Upon learning of the one-piece mechanism - able to be inserted with a lateral approach - surgeons commend AxioMed in creating a much more viable treatment option for cases where anterior approach was previously the sole option.

AxioMed announces the release of its lateral total disc replacement at the North American Spine Society (NASS) 2017 Annual Meeting. The company is expecting the first surgery to be done in Jamaica by Dr. Kingsley R. Chin before the end of this year. AxioMed has hired two top executives - Chief Business Officer & Executive Vice President Ken Yamada and Vice President of Global Business David Jones - to oversee the expansion of the lateral disc outside the US (OUS) while they seek FDA PMA approval for the lateral disc next year.

"Surgeons worldwide are enthusiastic about the AxioMed disc's potential and the preexisting outcomes completed with this technology. The disc's core viscoelastic properties allow for both disc space and normal physiological movement to be restored - something that has not been possible with older total disc replacement designs. Upon learning of the one-piece mechanism - able to be inserted with a lateral approach - surgeons commend AxioMed in creating a much more viable treatment alternative for cases where anterior approach was previously the sole option," said AxioMed VP of Global Business David Jones.

AxioMed will display their lateral disc replacement technology at NASS 2017, offering surgeons the opportunity to demo the technique. The AxioMed lateral disc replacement announcement comes only weeks after the company closed its first round of investing and immediately opened its second round of $10 million to build discs for OUS commercialization and begin its multi-level cervical IDE in the US.

“With the addition of the lateral lumbar technique and our multi-level Cervical IDE, we expect AxioMed to be the worldwide leader in disc replacement spine surgery," said AxioMed CEO Dr. Kingsley R. Chin.

About AxioMed
Founded in 2001, AxioMed began its journey of exhaustively proving the Freedom® Disc through clinical studies in the USA and Europe, research, development and testing. In 2014, KICVentures recognized the disc’s enormous potential and acquired the company into their healthcare portfolio. AxioMed owns an exclusive viscoelastic material license on its proprietary Freedom Disc technology.