Airwolf 3D proves how easy it is to 3D-print large custom car parts by debuting 'The 3D-Printed Hellcat Project' at the SEMA Show in Las Vegas, NV. The project features the company's Dodge Challenger SRT Hellcat loaded with 3D-printed modifications. 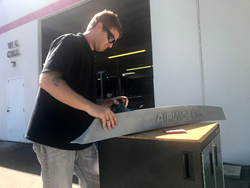 If a group of car nuts can design and 3D print beautiful parts for the Dodge Challenger SRT Hellcat, what can a true automotive professional achieve when empowered with the same tools?

If there's one thing the majority of employees at Airwolf 3D find more irresistible than 3D printing, it's cars. Fortunately for the Airwolf 3D team, or the "Wolfpack" as they call themselves, company Co-Founder and Chief Technology Officer Erick Wolf has built a collection of project cars for him and his team to customize with 3D-printed parts.

"We're basically a hot rod shop that builds 3D printers," Wolf stated. "We customize cars using Airwolf 3D printers because it's fun and it's our passion, but it's also a great way to show off our printers' capabilities. If a group of car nuts can design and 3D print beautiful parts for the Dodge Challenger SRT Hellcat, what can a true automotive professional achieve when empowered with the same tools?"

And that's exactly the message that the California-based 3D printer manufacturer hopes to deliver at the upcoming SEMA Show in Las Vegas, NV. One of the largest automotive trade shows in the world, the SEMA Show is the ultimate destination for exhibiting the hottest automotive specialty products on the market. On Oct. 29, Airwolf 3D will be driving the company's red Dodge Hellcat into the Westgate Las Vegas Hotel & Casino and parking it in Booth #15011 before the show opens on October 31.

Nicknamed the "World's Most 3D-Printed Hellcat," Airwolf 3D's project car is a 2016 Dodge Challenger SRT Hellcat. The modern muscle car has received quite a few 3D-printed upgrades since the company started "The 3D-Printed Hellcat Project" almost 10 months ago.

From Wolf and his team of engineers to the company's sales department and design interns, numerous members of the Airwolf 3D Wolfpack pitched in to help get the car ready for the SEMA Show. According to Wolf, the only rule he had was that all parts must be original designs that are customized specifically for the Hellcat. With the innovative spirit that Airwolf 3D strives to embody as an organization, the Wolfpack rose to the occasion, making a variety of custom 3D-printed parts, such as grated hood scoop vent and air intake covers, scooped headlight bezels, and plenty of redesigned interior accents, including speaker covers, cup holders, and coat hooks. To showcase the uncommonly large build volume of the company's AXIOM series 3D printers, the Wolfpack even designed and 3D-printed an enlarged ducktail-style rear spoiler featuring the "Airwolf 3D" logo.

Since the company's inception in 2012, Airwolf 3D printers have emerged as the top desktop 3D printer of choice for automotive use. Airwolf 3D's reputation in the automotive industry largely resulted from the company's release of the first commercial desktop 3D printers capable of printing large parts in high-temperature engineering grade materials like polycarbonate and polypropylene. In further response to the needs of the industry, Airwolf 3D later released Wolfbite ULTRA in 2016. The only product of its kind on the market, Wolfbite ULTRA prevents polypropylene parts from warping by bonding the parts to the print bed, but then releasing them easily once cooled. For more information on the best 3D printer in its class, please contact Airwolf 3D at (949) 478-2933 or email info(at)airwolf3d(dot)com. Free demonstrations are available at the company’s showroom located at 11208 Young River Avenue, Fountain Valley, CA 92708.