Academy’s Performing Arts Department adds their own creative spin to the beloved musical. 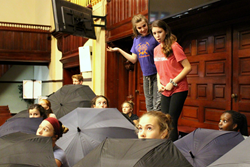 The film version is such a beloved classic. Instead of focusing our energy on re-creating the movie for the stage, we wanted to give our audiences a more theatrical--rather than cinematic--experience.

Bradford Christian Academy, the award-winning college-preparatory academy serving students in grades 1-12, will present The Wizard of Oz at the First Baptist Church of Haverhill, MA, on November 16, 17, and 18 at 7:00 pm, but expect the unexpected, advises Matt Perusse, Bradford’s Director of Performing Arts.

The Wizard of Oz is a well-known and heartwarming tale of magic and fantasy, good and evil, and family and friendship. Based on L. Frank Baum’s novel and the 1939 film, this musical adaption of The Wizard of Oz is full of tunes from the timeless film such as “We’re Off To See the Wizard”, If I Only Had A Brain”, “The Merry Old Land of Oz”, and—of course—“Somewhere Over The Rainbow”.

The Bradford Christian Academy version, however, incorporates their own unique interpretation of the classic. Perusse states, “The film version is such a beloved classic. Instead of focusing our energy on re-creating the movie for the stage, we wanted to give our audiences a more theatrical--rather than cinematic--experience.” By incorporating traditional elements non-traditional ways, BCA’s production aims to give its audience an entirely unique experience.

Joel Arthur Nicolas, choreographer and Bradford’s Director of Dance, explains: “As we were thinking about the show, we were consistently reminded of the impact of weather as a central theme. The tornado, the wind blowing the Wizard’s balloon off course, even the name Dorothy Gale is weather related. So we thought, ‘What if we could incorporate weather-related items—in our case, umbrellas—into every scene, but never use them as umbrellas?’. As a result, I think we have devised a really creative interpretation of the story.”

The cast—comprised of students in grades 6 through 12—have enjoyed the artistic process. Zack Gaiero, a BCA junior, plays the Scarecrow, adds: “Because we are all so familiar with the movie, we have a preconceived vision of how every scene will play out. Going through the rehearsal process, it’s been exciting to see how our ideas and interpretation can lead to something totally unexpected.”

The Wizard of Oz director Monica Romig adds: “Growing up, my mom would remind me every Christmas that when she was a little girl, The Wizard of Oz would be played on television once a year at Christmastime. She said it was always a favorite memory of hers. As we work on this production I know we are holding true to the spirit of the iconic classic while totally making it our own. This is a Wizard of Oz no one has seen before—and once people see Bradford’s version, we hope it will be a new favorite memory for many.”

More information or to purchase tickets, please visit at http://www.bradfordchristianacademy.org.