EarthCam, the leading provider of construction camera technology, was chosen by The Statue of Liberty-Ellis Island Foundation to document the entire construction process for historic record. 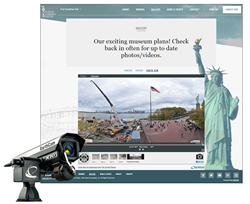 We’re proud to continue our long-standing partnership with The Statue of Liberty-Ellis Island Foundation to showcase the incredible beauty of Liberty Island.

Construction progress continues for Lady Liberty’s next crowning legacy, the Statue of Liberty Museum on Liberty Island in New York. Slated to open in 2019, the museum will be the most significant addition to the island since the arrival of the Statue herself in June 1885. EarthCam, the leading provider of construction camera technology, was chosen by The Statue of Liberty-Ellis Island Foundation to document the entire construction process for historic record.

EarthCam is sharing the process and offering people around the world free tickets to see the ongoing construction views online via a public web page. Viewers will experience an unmatched look at the historic project with one billion pixel panoramic images generated by EarthCam’s GigapixelCam system.

“We’re proud to continue our long-standing partnership with The Statue of Liberty-Ellis Island Foundation to showcase the incredible beauty of Liberty Island,” said Brian Cury, CEO and Founder of EarthCam. “I hope viewers will enjoy being a part of the next exciting chapter in Lady Liberty’s history with the virtual insight into the construction process. We look forward to producing a time-lapse movie that chronicles the genesis of this fascinating museum.”

The new camera at the site of the Statue of Liberty Museum joins EarthCam’s existing collection of 7 cameras celebrating the Statue of Liberty. In 2011, for Lady Liberty’s 125th birthday, EarthCam designed, built and installed specially-engineered webcams on the torch balcony, offering an immersive 360° view of an area that has been closed to the public since 1916. The webcams deliver completely unique panoramic views of the New York Harbor, New York City skyline and the exclusive “selfie” CrownCam shot.

“We congratulate EarthCam on their latest Telly Award,” said Stephen A. Briganti, President and CEO of The Statue of Liberty-Ellis Island Foundation. “Only EarthCam can offer this daily look at the creation of the new Statue of Liberty Museum and the Foundation is delighted to again be collaborating with them to provide a unique perspective of what is happening on Liberty Island.”

With a project team headed by architect Nicholas Garrison of FXFOWLE and Construction Manager, Phelps Construction Group, the 26,000-square-foot building will replace the small exhibition space currently inside the pedestal of the Statue of Liberty. The unique design features a glass roof that seemingly blends in with the surrounding landscape and offers incredible views of America’s Great Lady and the New York Harbor. The interior will feature the statue’s original torch, which was replaced during a major renovation in the 1980s.

To follow construction progress for the new Statue of Liberty Museum, visit http://earthcam.com/solmuseum.

ABOUT EARTHCAM
EarthCam is the global leader in providing webcam content, technology and services. Founded in 1996, EarthCam provides live streaming video, time-lapse construction cameras and photography documentation for corporate and government clients in major cities around the world. EarthCam leads the industry with the highest resolution imagery available, including the world’s first outdoor gigapixel panorama camera system. This patent-pending technology delivers superior multi-billion pixel clarity for monitoring and archiving important projects and events across the globe. In 2016, EarthCam documented $225 billion of construction projects. The company is currently expanding its 10-acre campus in Northern New Jersey and maintains 13 additional offices worldwide.