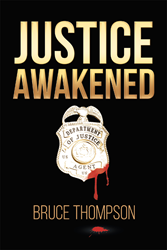 Bruce Thompson, a lover of mysteries and crime fiction who served in the Marine Corps, has completed his new book “Justice Awakened”: an engaging story dealing with a form of injustice committed by people in position that the public usually trust, like the local police.

Author Thompson gives a picture of how difficult it is to accept and reveal the ugly truth that officers from the police department are involved in a crime: “Captain Bill Gallagher looked at Amy, temporarily at a loss for words. He did not doubt what his eyes had just witnessed. His cognitive mind knew Dickson was fully capable of this action, but subconsciously, he did not want to believe it for one reason. The ramifications and magnitude of this murder and the link to corruption in the Forty-Third Precinct would have a catastrophic effect on and could decimate his police department. This corruption and the subsequent arrests would have an epic negative impact on the police department and the public’s trust of the department. If Jackson and Andrews were involved, that would mean two entire units within the Forty-Third Precinct were corrupt and involved in the criminal enterprise. The arrests would have the effect of tainting the entire police department in the eyes of the citizens.”

Published by New York City-based Page Publishing, Bruce Thompson’s entertaining work of fiction leads readers to enjoy an agent’s chase for those who used their credentials and badges to hide their crimes. The powerful writing also makes one appreciative of those who are willing to sacrifice their lives to expose injustices.

Readers who wish to experience this thought-provoking work can purchase “Justice Awakened” at bookstores everywhere, or online at the Apple iTunes store, Amazon, Google Play, Kobo or Barnes and Noble.