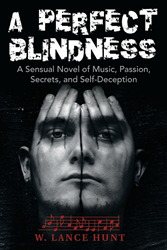 The late 80s Chicago Goth-Industrial scene was an experience author W. Lance Hunt will not soon forget. As a former roadie, with a background in theatre, film, and television, Hunt was immersed in the music scene of the era. Now, as a professional writer, he has transposed many of his own experiences into the characters and events found in his debut novel, “A Perfect Blindness – A Sensual Novel of Music, Passion, Secrets and Self-Deception.”

A compelling literary novel for the senses, “A Perfect Blindness” follows the interweaving stories of two best friends and the lover of one as they stumble towards self-understanding they can only have when they finally realize that “Who we really are hangs someplace between all the stories, suspended in the contradictions.” Set in late 80s Chicago, the novel pays homage to the Goth-Industrial scene with visits to the bars, clubs, and music venues of that era while a tale of love, loss, friendship, failure, success and even death plays out for the reader as experienced by each of the three protagonists who reveal that self-deception is the most treacherous lie of all.

“An expansive historical novel that ably evokes its time and place. Hunt writes in a dense, passionate prose that strives to enliven everything it touches.” – Kirkus Review

“Littered with cigarette butts, vodka bottles, and a dead body, A Perfect Blindness is a grunge rock fantasy. With its operatic sense of drama, it is an escape story ideal for those who still live out their rock star dreams whenever they close their eyes.” – Clarion Review

Music plays a key role in the novel with references to many 80s era bands, such as Joy Division, and mentions of specific songs throughout the story. Hunt also provides a playlist of songs he encourages readers to listen to while reading the book to create a more immersive experience, which can be found at The Sounds of A Perfect Blindness.

About the author
W. Lance Hunt earned concurrent bachelor’s degrees from Ohio State University, cofounded the Rudely Elegant Theatre in Chicago, and helped produce an Emmy Award-winning film. After living in Mexico City, he moved to New York City, where he earned a Master of Arts in English from CCNY. Hunt works as a freelance writer and editor and lives in Brooklyn with his wife and son. To learn more please visit WLanceHunt.com.