In celebration of Thanksgiving, Vocational Rehabilitation shares a man’s journey to holding onto hope and finding a new career direction with his disability. 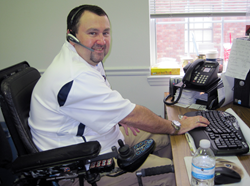 Daryl at work on his computer at Access Behavioral Health.

Getting out, at first, was a scary thing. You have to make yourself take that first step and Vocational Rehab is what got me to the first step.

One minute Daryl Young was working as an electrician at an industrial chemical plant and looking forward to becoming a full time deputy sheriff; the next, he was completely paralyzed from the neck down. He had developed transverse myelitis, a rare neurological disorder that causes inflammation of the spinal cord. “I thought I was having a heart attack,” Daryl says. “It progressed throughout the day, and by the end of the night, I was completely paralyzed from the neck down.”

After months of therapy and hard work, Daryl has recovered approximately 70 percent of the use of his body. He uses a wheelchair to get around. Because of his disability, Daryl knew that he needed to change his career goal, and that’s where Vocational Rehabilitation (VR) came in. “God blessed me with Eddie [Eddie Wiggins, Daryl’s VR Counselor],” he says. “He was miraculous in what he has done. I look at him as a friend, and there’s absolutely no way I could be here without his help.”

VR helped with a new wheelchair and made home and van modifications so Daryl could get around on his own. After discussing his job options, Eddie suggested that Daryl try a job in an office setting. Daryl attended a computer class; and then continued his training.

In order to get job experience, Eddie suggested that Daryl participate in VR’s On-the-Job Training program with Access Behavioral Health. According to Daryl, it turned out to be a win-win situation for himself and his employer. “It took the burden off of going into a new job and doing things that I wasn’t familiar with,” he says. “It took the load off my employer as well, because I was there to learn and hopefully grow into a position.”

On-the-Job Training is a VR program where employers train potential employees and give them the opportunity to experience work in an actual job setting. VR pays the employee’s salary during OJT, along with reasonable training costs and any accommodations needed.

After six months of training, Daryl was hired as a part time Peer Transition Liaison to patients who are transitioning from the hospital to home. His boss, Ellen Peppler, couldn’t be happier with his work. “Daryl has to make a lot of phone calls,” she says. “And he’s really intuitive about people. He has empathy, and he’s always kind.”

Daryl may use a wheelchair to get around, but the chair doesn’t define who he is at home or in the work place. Ellen explains that when they first met Daryl at Access Behavioral Health, they saw his outward appearance and were a little apprehensive about working with an employee with a disability. “But after two days here, nobody even noticed his wheelchair anymore,” she says. “In Daryl’s case, it goes away and everyone just sees Daryl, and what he is capable of doing and his wonderful attitude.”

Daryl believes that his disability actually helps him with his job and says that the patients can gain more from dealing peer-to-peer than from a strictly clinical situation. “Their situation may not be traumatic in the same respect as mine, but it is still traumatic to be released from the hospital, and I can talk to them more one on one, personally.”

Daryl loves his job and is thrilled with VR. “I can’t wait when I get up in the morning,” he says. “I think to myself, do I work today? It’s almost like going to the movies; I mean I enjoy it that much.”

He also enjoys volunteering with the Miracle League, a baseball league for kids with mental and physical challenges, taking every opportunity to speak to young people with disabilities about not taking even one minute of a day for granted.

Eddie says that Daryl is a pleasure to work with, and he is very proud that Daryl is “employed in a job that brings meaning to his life, and has greatly benefited those who he works for and serves.”

Daryl says that “Getting out, at first, was a scary thing. You have to make yourself take that first step and Vocational Rehab is what got me to the first step. I just hope that everybody will take advantage of and trust in Vocational Rehab, so that many more people can have the same experience that I had. And I hope that more people will try the OJT experience, because it’s a no-brainer.”

If your business would like to participate in the On-the-Job Training program, contact your local VR office at (800) 451-4327 or visit Rehabworks.org for a list of offices near you.