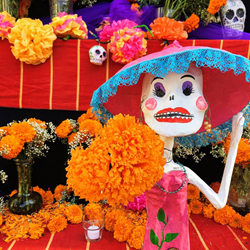 Mexican marigold is said to awaken the souls of the departed, guiding them back to their families on the Day of the Dead

According to ancient Aztec tradition, the peppery aroma and bright color of the Mexican marigold is said to awaken the souls of the departed, guiding them back to their families on the Day of the Dead. The Aztecs believed the flor de muertos - flower of the dead carried the added insurance of preventing undesirable spirits from returning instead of beloved family members. “It’s better to be safe than sorry. It may just be superstition but why take a chance, “says Robert Rojas co-owner of Vinny’s Wholesale Flowers one of several CFM Downtown LA wholesale flower market petalers reporting a healthy uptick in sales compared to Dia De Los Muertos last year. Dia De Los Muertos, a national holiday in Mexico, is celebrated in the U.S. October 31 through November 2.

Rojas, a Mexican-American says his extended family celebrates privately with a family gathering. They also build home altars with photos of the deceased and traditional elements representing earth, wind, fire, food, marigolds and other flowers. In greater Los Angeles, Dia De Los Muertos public events in parks, neighborhoods, churches and cemeteries extend from October 28 through November 5. Rojas says he has seen an increase in number of public events and private DDLM celebrations. He attributes his business uptick to increased celebrations and the volume of wholesale orders for large, elaborate award winning public altars at cemetery events like Hollywood Forever where a single altar may use 1200 – 12,000 marigold stems.

Data from a “Hispanic Holidays” survey by the GolinHarris Multicultural Practice, confirms Dia De Los Muertos celebrations are increasing locally and nationally. The report Dia De Los Muertos: The Next American Holiday shows 37 % of West Coast Hispanics celebrate Day of the Dead by building an altar, celebrating at a cemetery or baking pan de muerto. They say they celebrate for these reasons:

Award-Winning Altars Use up to 12,500 MarigoldsHollywood Forever Cemetery