The Secret to Programming the Human Mind

Author Robert L. Blackburn bases new thriller on his own discoveries in his new book. 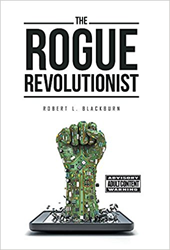 The computer model of the human mind shows us how the mind operates to seek its own survival.

Charley Black unlocks the secret to programming the human mind. He writes about his findings, but goes mostly unnoticed throughout his work and publishing. That is, until the government stumbles upon his website and decides he knows too much.

In “The Rogue Revolutionist,” by Robert L. Blackburn, Black is suddenly fighting for his life after quietly trying to change the world on his own, for years. Like Black, Blackburn has also made it his mission to create awareness about the computer model of the human mind and how it can bring sanity to a world headed for self-destruction.

“The computer model of the human mind shows us how the mind operates to seek its own survival,” Blackburn said, “and how humans trick the human survival program into seeking the survival of all sorts of things unrelated to a long, pleasurable and pain-free continuance.”

Blackburn, who served in the U.S. Army Intelligence and authored several other pieces of literature based on the human mind and its abilities, claims, like his character, that the computer model of the human mind can extract humans from the situation in which they find themselves.

“Using this computer model of the mind to show humans what they are doing to themselves with their belief systems, they will finally have the opportunity to stop doing it. People will have a legitimate choice between the tyranny of beliefs or pure reason.”

About the author
Robert L. Blackburn served in the U.S. Army Intelligence in Verona, Italy, and authored the “Mind Insurgent Handbook,” “Program of the Human Mind” and “Ben and the Critter Congress.” His debut novel is loosely based on his own experience and published works.
To learn more about the author, visit http://www.revolutionofreason.com.