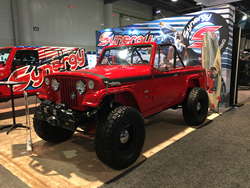 There was clearly a lot of thought, effort and skill put into this build and with so many over-the-top trucks and Jeeps on display at the show, this simple, clean, well-executed project represents exactly what this award is all about

The ceremony, held at the Pro Comp/Transamerican Auto Parts SEMA Show booth, revealing the winning entry was hosted by World Famous KROQ DJ Jay “Lightning” Tilles alongside the panel of judges featuring some of the most distinguished names in off-road vehicle engineering and development, fabrication, journalism and motorsports.

“Synergy’s Jeepster Commando captures the essence of the Life is Better Off-Road Award for its on and off-road capabilities and the perfect blend of modern 4x4 technology and vintage, attention grabbing style,” said Transamerican Auto Parts President and CEO Greg Adler “There was clearly a lot of thought, effort and skill put into this build and with so many over-the-top trucks and Jeeps on display at the show, this simple, clean, well-executed project represents exactly what this award is all about.”

According to Dave Schlossberg of Synergy Manufacturing, his team wanted to create a stock looking Jeep that remained one-hundred percent functional as an off-roader while bringing out the exquisiteness of vintage Jeep Iron. To achieve this, the team began with a 1971 Jeepster Commando that had seen better days and mated it to a brand-new Jeep JKU Chassis. With nearly 50 years separating these two Jeeps, Dave set out to keep the stock appearance and the Jeepster’s 101” wheel base while completely modifying the frame and suspension.

“We want to thank Transamerican Auto Parts for hosting this award. I want to say thank you to everyone who had a part of making this project come to life and all of the partners who came together to support this build,” said Schlossberg. “It was truly a team effort!”

Entries were submitted up until just days before the SEMA Show began and semi-finalists were selected based on criteria such as off-road reliability and capability, quality of craftsmanship, real-world functionality and overall vehicle presentation. From this field, one truck/SUV and one Jeep were chosen as finalists competing to be awarded as the most authentic off-road-capable vehicle at the 2017 SEMA Show.

The Jeepster Commando will receive a professional photo shoot and a cover feature and multi-page vehicle spotlight in ORA Magazine. Additionally, the vehicle will be recognized across the spectrum of Transamerican social media and digital channels, an invitation to be displayed in feature locations at TAP-sponsored events, tradeshows, Truck & Jeep Fests, along with the benefits of extensive partner media coverage of the award. The semi-finalists will also be included in the full media campaign and receive ribbons in recognition of their accomplishment.

Semi-finalists for the 2017 Life is Better Off-Road Award:

Life is Better Off-Road™
There are those among us who believe that pursuing life off-road means rock crawling, trail running, and mud bogging, or maybe storming across the open desert at speed. We agree. Setting off to conquer the earth is why you built your ultimate truck or Jeep. To others, the ultimate adventure is finding the wave, hiking a new trail, kayaking down a roaring river or skiing the impossible run. Your adventure could be loading the family into your truck and heading out to camp under the stars, pulling your boat to a lake, or carrying your dirt bike to a remote trail. Whatever your adventure, make the journey as exciting as the destination. Get outside. Explore, unplug, play in the dirt and go further. Because Life is Better Off-Road.™