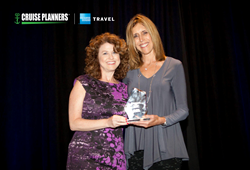 “When designing new technology, we strive to provide high-tech solutions for franchisees that strengthen the connection between travel agents and their clients,” Michelle Fee, CEO and co-founder of Cruise Planners.

The nation’s leading home-based travel franchise, Cruise Planners®, an American Express Travel Representative, recently earned a FranTech Award from the International Franchise Association (IFA) and continues to stand out as a leader in innovation and technology. Presented at the 2017 FranTech Franchise Innovation Conference, October 19-20 in San Diego, the IFA award recognized Cruise Planners for its 2017 Technology Suite for travel agents which includes CP View™, CP Insights™ and the newly redesigned corporate website. Announced to travel agents at its 2017 Annual Conference on October 16, Cruise Planners continues to make strides in technology and innovation by becoming the first home-based travel agency to enter the world of Artificial Intelligence with the introduction of two new Alexa Skills making vacation planning easy for consumers and serve as a virtual assistant for travel agents.

“The 2017 technology suite represents the largest amount of tech innovations ever launched by Cruise Planners and provides highly efficient and targeted insight for franchise owners to market and work with their clients,” said Michelle Fee, CEO and co-founder of Cruise Planners. “When designing new technology, we strive to provide high-tech solutions for franchisees that strengthen the connection between travel agents and their clients.”

Cruise Planners takes an in-depth approach and reviews a variety of sources for inspiration, most notably, how the most successful franchisees perform and what common sentiments are echoed across the network in terms of technology needs.

About Cruise Planners®, an American Express Travel Representative
Cruise Planners®, an American Express Travel Representative, is the nation’s largest home-based travel agent franchise network in the travel industry. Cruise Planners operates a network of more than 1,800 franchise owners who independently book amazing vacation and travel experiences for their clients. The Florida-based Home Office Team positions a nation-wide network of franchise owners for success by providing innovative marketing, booking and technology tools, as well as professional development and hands-on training with the industry’s top executives. The company continues to be lauded and has been named the No.1 travel franchise by Entrepreneur magazine for 14 consecutive years. Cruise Planners was recently featured in Entrepreneur as one of the top 30 franchise innovators in technology, has been consistently named as one of the Top Women-Owned Businesses by the South Florida Business Journal, is on the Inc. 5000 list as one of the fastest-growing private companies in America, has been ranked as the #1 travel franchise by Franchise Business Review for 6 years in a row, and was recognized as one of the Top Workplaces by the Sun Sentinel since it started ranking companies.