As Veterans Day approaches, Eternal Reefs announces the first undersea memorial that will recognize all lost submarine crews and boats will be dedicated in Sarasota, Fla. next Memorial Day, 50 years after the loss of the USS Scorpion. 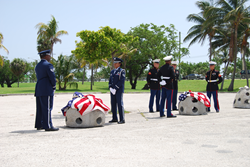 "We can think of no more fitting memorial to these veterans who lost their lives serving our country beneath the waves than the On Eternal Patrol Memorial Reef. They will continue to serve and protect our marine environment for the benefit of future generations."

As Veterans Day approaches, Eternal Reefs, Inc., a Sarasota-based 501c3 memorial organization, in partnership with Reef Innovations and The Reef Ball Foundation, announces plans to create the “On Eternal Patrol Memorial Reef.” The new underwater reef will be a collection of 67 reef balls representing the first ever undersea memorial to honor the crews of all 66 U.S. manned submarines that never returned and remain On Eternal Patrol and one reef ball representing the crews and boats lost in non-sinking accidents. The On Eternal Patrol Memorial Reef will be dedicated in Sarasota, Fla. on Memorial Day 2018, almost 50 years to the day after the U.S. nuclear submarine USS Scorpion was lost with all 99 officers and crew on 22 May 1968.

“We can think of no more fitting memorial to these veterans who lost their lives serving our country beneath the waves and it’s particularly impactful that we will make the dedication at the 50th anniversary of the loss of those 99 lives that were aboard the USS Scorpion,” said George Frankel, Eternal Reefs CEO. “These submarines and their crews will continue to serve and protect our marine environment for the benefit of future generations.”

Since the USS H.L. Hunley proved the potential of submarines in warfare, there have been 66 American manned submarines (representing more than 4,000 lost lives) missing at sea and never recovered. These submarines, crew members, and other officers and crew lost in non-sinking accidents, remain On Eternal Patrol. Many of these boats and crew members have never been recognized for their service and sacrifice.

Eternal Reefs has designed the first underwater memorial recognizing the work and sacrifice of submariners, “The Silent Service,” made in protecting the United States. View a video of the On Eternal Patrol Memorial Reef project, including a full listing of all submarines with their date of loss, on YouTube.

On Memorial Day, 28 May 2018, the Sarasota-based non-profit will unveil 67 Eternal Reef balls with plaques identifying each of the submarines still On Eternal Patrol and one additional Eternal Reef ball to represent submariners lost in non-sinking accidents.

A reef ball is a designed artificial reef, specifically engineered to mimic Mother Nature; when deployed to the ocean floor, the reef ball quickly assimilates into the ocean environment and begins to replenish the diminishing natural coral reefs. New marine growth begins in as little as three months. More than 700,000 reef balls have been placed in 70+ countries and, since 1998 nearly 2,000 Eternal Reefs have been placed in 25 permitted sites off the U.S. coastline. An Eternal Reef is a reef ball that incorporates a person’s cremated remains giving family and friends a permanent underwater memorial for their loved one.

The 67 Eternal Reefs in the On Eternal Patrol project will contain no cremated remains, only a bronze plaque on each, recognizing the lost veterans and their boats.

An honor guard will present flags next Memorial Day to representatives for the lost submariners and for many of the lost submariners this will be the first time they’ve been recognized collectively for their contribution and sacrifice. Find a complete list of the 66 boats On Eternal Patrol and the boats lost in non-sinking events at http://www.OnEternalPatrol.com.

“The idea of an underwater memorial for all the boats and submariners still On Eternal Patrol is perfect because that’s where they are,” said Al Smith, a submarine veteran who survived the 11 August 1949 sinking of the USS Cochino (SS-345).

Shortly after Memorial Day 2018, the 67 reef balls will be deployed to the ocean off the coastline of Sarasota in a permitted artificial reef site, creating the On Eternal Patrol Memorial Reef, the world’s only undersea memorial to submarines and their crews who remain On Eternal Patrol.

Eternal Reefs is accepting outside funding to support the On Eternal Patrol Memorial Reef. Interested parties should call 888-423-7333 or email info(at)EternalReefs(dot)com.

About Eternal Reefs
The Genesis Reef Project dba Eternal Reefs, Inc. is a Sarasota-based non-profit organization that provides a creative, environmentally-enhancing way to memorialize the cremated remains of a loved one. Eternal Reefs incorporates cremated remains into a proprietary concrete mixture used to cast artificial reef formations which are then dedicated as permanent memorials which bolster natural coastal reef formations. Eternal Reefs pioneered the concept of reef memorialization and, since 1998, the organization has placed nearly 2,000 Memorial Reefs in 25 locations off the coasts of Florida (North Atlantic, South Atlantic, Gulf Coast and Panhandle), Maryland, New Jersey, North Carolina, South Carolina, Texas and Virginia, substantially increasing the ocean’s diminishing reef systems. Memorial reefs can only go in properly permitted locations by the U.S. Government. Eternal Reefs has strategic partnerships with the Reef Ball Foundation and Reef Innovations. The company secured 501c3 status in January 2017. Learn more at http://www.EternalReefs.com or on the company's Facebook page: https://www.facebook.com/eternalreefs/.