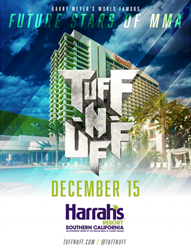 Tuff-N-Uff fans know that our events always feature the absolute best amateur MMA action in the nation, and it's a real opportunity to catch a glimpse of the future stars of the sport," Tuff-N-Uff CEO Jeff Meyer said. "

Barry Meyer's "World Famous Tuff–N–Uff: Future Stars of MMA" is slated to return to the San Diego area for the first time in 14 years.

Tuff-N-Uff officials are proud to announce that the nation's brightest MMA prospects will gather on Friday, Dec. 15, for a night of high-paced mixed martial arts action at Harrah's Resort Southern California in Funner, California.

“We’re looking forward to welcoming Tuff-N-Uff to Funner, California,” says Darrell Pilant, general manager and senior vice president of Harrah’s Resort Southern California. “This is a really exciting experience for our guests and we’re happy to be bringing such an action-packed event to Harrah’s Resort SoCal.”

The Las Vegas-based promotion, which plans on hosting multiple events across the state of California in 2018, last visited the San Diego area in 2003 to host the North American qualifiers for that year's Abu Dhabi Combat Club Submission Wrestling World Championship

"Tuff-N-Uff fans know that our events always feature the absolute best amateur MMA action in the nation, and it's a real opportunity to catch a glimpse of the future stars of the sport," Tuff-N-Uff CEO Jeff Meyer said. "But this San Diego event will be a special one for us. Before he moved to Las Vegas, my brother, Barry – who founded Tuff-N-Uff – lived in San Diego for more than 15 years, training in martial arts with stars in the community such as Fabio Santos, Rodrigo Medeiros and Dean Lister.

"I also lived in San Diego for many years, as well, so the opportunity to come back and host an event is truly an honor, and to partner with a fantastic property like Harrah's Resort Southern California makes it all the more special."

"While Las Vegas is unquestionably the fight capital of the world, the MMA scene in Southern California is among the best in the world, as well," Lindsey said. "We look forward to bringing the nation's top amateur promotion to San Diego and believe the talent we find in the area along with a roster of outstanding prospects we already work with will provide an unforgettable night of action you won't want to miss."

A full fight card will be announced shortly at TuffNUff.com. Tickets go on sale soon at http://www.harrahssocal.com/events.

About Tuff-N-Uff:
A 24-year old combat sports organization, the Las Vegas-based TUFF-N- UFF presents the best amateur mixed martial arts (MMA) action in the nation. It has given rise to some of the biggest stars in the sport today, including UFC bantamweight champion Ronda Rousey, as well UFC and Strikeforce veteran Ryan Couture, UFC welterweight Alan Jouban and UFC Light Heavyweight Khalil Rountree. TUFF-N- UFF celebrated its historic 20th anniversary on Saturday, June 7, 2014, with over 15,000 fans, in a sold-out live event inside the Thomas and Mack Center. TUFF-N-UFF is committed to growing the sport of MMA and building the “Future Stars of MMA”. For more information, visit TuffNUff.com, Follow on Twitter and Instagram @TuffNuff and LIKE us on Facebook at http://www.facebook.com/tuffnuff.