A rare dual championship in both the PBR and PRCA for SweetPro's Bruiser. 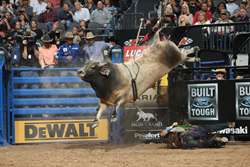 We'll never, ever see another Bruiser.

Bruiser Is One of a Kind
Cody Lambert is the PBR Director of Livestock and in this PBR interview he said “Bruiser’s got it all and he’s got the best personality. He’s the coolest bull.” Adding “We’ll never, ever see another Bruiser.”

H.D. Page of D&H Cattle said “That is just his deal. He is cool as a cucumber.” And all the riders want the chance to ride Bruiser because he can bring their point totals up, while being calm in the shoot and a strong but very predictable bucker. J.W. Hart commented “He’s so big, that’s the thing. It’s hard for a bull that big to get that far off of the ground, and he does it.”

Feeding Top Bulls
Erick Thornberg of SweetPro Feeds said that many of the top bull owners like Bruiser’s D&H Cattle, and Pearl Harbor’s Chad Berger are getting consistently strong performances from their bulls while using SweetPro products. Thornberg believes a big percentage of the owners of the 1800 bucking bulls in PBR (Professional Bull Riders) and PRCA (Professional Rodeo Cowboys Association) events use SweetPro blocks and loose meal in their competitive bull programs. The results that D&H Cattle and Chad Berger have had with their top winning bulls have been proof positive.

Typically, stock contractors will put their young bulls in pasture for 1 to 3 years using SweetPro 250 lb mineral lick blocks. When the best of the young bulls are selected for competition, the owners add Fresh Start loose meal to their regular feed. When competitions come around, those bulls are given EquiPride loose meal for 2 or 3 days days before each competition. This helps the bulls keep their appetites up and stress levels down, which can be difficult with all of the trailer travel and hectic event schedules. Following the competitions, EquiPride is also provided for a few days to help with recovery and conditioning. Then it’s back to Fresh Start until the next event.

Erick added "SweetPro is the real deal. It is cost effective and it works. We have a lot of people using our products and we are helping put these people in the money. The last three PBR Bulls of the Year have been fed SweetPro, and the last six ABBI Classic Champions were fed SweetPro. When the Classic Champion walks away with a $200k prize, that's a lot of money going back into our stock contractors' pockets."

A Championship Battle
Bob Thornberg, founder of SweetPro Feeds came from North Dakota to attend the PBR Finals and got to see Bruiser in a very close, head to head finish against Pearl Harbor, another bull that uses SweetPro products. As Bruiser was about to take center stage, Bob received a text message asking “How is Bruiser doing?” Within a matter of minutes, he texted the answer back “Just won it!”

Bruiser is the second D&H Cattle champion bull to be sponsored by SweetPro Feeds, following the PBR Champion bull SweetPro’s Long John. “The PBR is like a big family and we're glad to be a part of it. We are feeding the engine of one of the fastest growing sports in America" Bob said. “We couldn’t be prouder of Bruiser, H.D. Page and all the great folks at D&H Cattle. It’s been terrific to be a part of their championship season.”