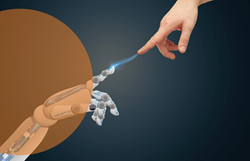 "After looking at the AI market we identified that there were no off-the-shelf applications that would lend themselves to integrating AI with traditional enterprise and operational risk management software. We are now in an exciting position to be able to announce the Xactium AI platform" Andy Evans

Xactium presented some of the innovative new AI functionality that will be incorporated into the Xactium Risk Management product during 2018. The Xactium Intelligence Engine will open up the opportunity for organisations using Xactium to further improve process efficiency, as well as benefit from valuable insights into their data that hasn't been available to them previously.

Andy Evans commented; "We believe that AI has huge potential to improve the efficiency, effectiveness and validity of both enterprise and operational risk management as well as providing new insights into the data that can significantly enhance decision making".

“Xactium is already one the most modern cloud based risk management platforms in the marketplace, and is rapidly being adopted by regulated organisations including DirectLine Group, MS Amlin, Argo and the Financial Conduct Authority. These innovations will further cement Xactium’s reputation for innovation and vision”.

The demonstrations presented at last week's conference were a culmination of 18 months investment in research and development that has resulted in the production of the first cloud based Intelligence Engine using Artificial Intelligence and machine learning integrated into a Risk Management system.

"After looking at the AI market we identified that there were no off-the-shelf applications that would lend themselves to integrating AI with traditional enterprise and operational risk management software. So our dedicated innovations team have been working on developing the Xactium AI engine to fill this gap in the market". Andy continued: "We are now in an exciting position to be able to announce the Xactium AI platform and start to demonstrate some of the key areas of new functionality that will be released in 2018".

The key functionality areas presented at the Xactium conference included: the ability for the Xactium Intelligence Engine to suggest appropriate controls for a new risk (taking into account previous knowledge of how controls for similar risks were chosen in the past), as well as the ability for the Engine to identify and suggest to the user appropriate actions following the report of an incident. Whilst these are only suggestions with the ultimate decision placed with the user, it provides a way of transforming the efficiency of the risk management process.

The new Intelligence Engine is enabling Xactium to be smart enough to learn from user interactions and data, not only to help users with requests, and take care of mundane tasks but also to anticipate and remind us of important ones.

As one delegate enthused; "This could potentially be a huge benefit to the Xactium user community as a whole if annonymised data from the machine learning capability could be combined into one learning knowledge database. Learnings on the effectiveness of many risk factors such as a controls or causes of incidents would significantly be enhanced, provided the right security safeguards could be put into place".

Xactium is a cloud based GRC software provider that helps Risk Managers to transform the way that Financial services organisations evaluate and manage their enterprise risk. The value of the risk process and its profile is raised through the use of risk intelligence that improves efficiency and creates insights that influence decisions across the business.

As the central risk platform used by the FCA to supervise the market, it has also been adopted by a wide range of financial services organisations from across the industry. Companies such as Direct Line Group, JLT, MS Amlin and Argo Group.