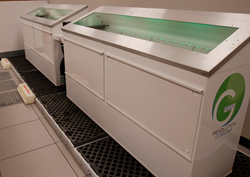 GRC’s immersion cooling racks at TACC’s J.J. Pickle Research Campus, owned and operated by the University of Texas in Austin.

Being early adopters of GRC’s immersion cooling system we have seen the technology mature rapidly over the years. And with the growing power and computing needs of AI and machine learning applications, especially with hotter and hotter GPUs, cooling is even more important for reliability.

Green Revolution Cooling (GRC) today announced that it will be delivering a custom GPU-based cluster to the Texas Advanced Computing Center (TACC). TACC has been a long-time advocate and user of GRC’s immersion cooling technology dating all the way back to 2009, when the technology was first brought to market. The installation has expanded over the years to include more racks and this new order will further build on the existing deployment.

The NVIDIA GPU-based cluster will be made up of GRC's Minimus Servers designed for immersion. The custom hardware made by GRC in partnership with Supermicro exploits the cost benefits of designing hardware specifically for immersion. By removing thermal constraints, immersion enables simpler layout and removal of components such as fans and intricate chassis designed for air flow.

“What's interesting about this expansion is the use of servers designed for immersion. Apart from the flexibility it provides us to get exactly the configuration we need, the cost savings that immersion cooling enables [on the hardware side] are extremely impressive,” said Dan Stanzione, Executive Director of TACC. “Being early adopters of GRC’s immersion cooling system we have seen the technology mature rapidly over the years. And with the growing power and computing needs of AI and machine learning applications, especially with hotter and hotter GPUs, cooling is even more important for reliability.”

As part of the new deployment, GRC will be joining the ‘Science and Technology Affiliates for Research’ (STAR) Industry Partners program. STAR offers opportunities for companies to increase their effectiveness through advanced computing technologies. The mission of this program is to promote a mutually beneficial exchange between industry and academia in advanced computing techniques and technologies, and at the same time foster a framework for technology innovation and support economic development in the state of Texas and across the nation. Through this program, GRC will collaborate with TACC to advance fundamental and applied research and development in the areas of science, technology, and engineering, among others.

“We are excited to see one of the leading HPC organizations in the world, and a long-running customer continue to expand their installation,” said Peter Poulin, CEO at Green Revolution Cooling “TACC has played a significant role in helping us improve our product and make it the mature solution it is today.”

This is the second custom cluster that GRC has announced in as many months, coming off the success of its custom cluster deployment at John Paul Catholic University. “Our goal is to make HPC more affordable. Offering lower cost, energy dense servers that take full advantage of our highly efficient CarnotJet cooling system is a huge benefit to our customers,” said Larry Stone, VP of Engineering at GRC “we are seeing a growing number of people opt for servers designed for immersion, over traditional big brand OEM hardware.” GRC will be showing off its immersion cooling system as well as its Minimus severs at the SuperComputing showing (SC17) in Denver next week (November 12-17) located at booth 1833.

About GRC
Green Revolution Cooling is the leader in the liquid immersion cooling market for data centers. GRC’s CarnotJet System, a rack-based immersion cooling system for servers, uses a dielectric fluid as the coolant that eliminates the need for chillers, air conditioners, and air handlers. Thereby, helping cut data center construction costs by up to 60%, while reducing data center cooling energy by up to 95%. GRC’s solutions have helped some of the largest cloud, HPC, and telecom organizations build extremely efficient, cost effective, and resilient data centers across the globe. Visit http://www.grcooling.com for more information.
Connect with GRC on LinkedIn, Twitter (@GRCooling), Facebook, and Youtube.