Featuring the mesmerizing vocals of dance music vocalist, Emma Hewitt, “Missing” is the contemporary re-work of the 1994 megahit of the same title by the band, Everything But The Girl. “Missing” is the fourth release from Andrew Rayel’s new record label, inHarmony Music. 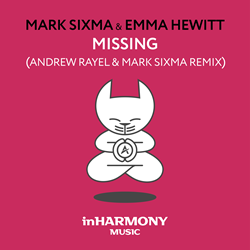 It would prove only natural that the Andrew Rayel & Mark Sixma Remix of “Missing” should find a home on Rayel’s shiny new record label, inHarmony Music.

Characterized by one of the most memorable, timeless toplines in pop music history, “Missing” was the biggest mainstream hit song by the band, Everything But The Girl, peaking at #2 on the Billboard ‘Hot 100’ chart in 1995. The song also earned the band an RIAA Gold certification in the U.S. in 1996 following the release of the song as a single by Atlantic Records. Too young to have fallen in love with the song the first time around, Mark Sixma nevertheless possesses an acute ear for melody. It was only recently that he decided to re-record the song, enlisting friend and noteworthy clubland singer, Emma Hewitt, to reimagine Tracey Thorn’s original vocals. Rising to the occasion and elevating her supreme talents to soaring new heights, Hewitt hit the ball out-of-the-park with her rendition for Mark Sixma’s “Missing.” In a perfect twist of timing and opportunity, Andrew Rayel had just announced the launch of his own imprint, inHarmony Music. It would prove only natural that the Andrew Rayel & Mark Sixma Remix of “Missing” should find a home on Rayel’s shiny new record label. Mark Sixma featuring Emma Hewitt’s “Missing” elicits wild, unadulterated glee when Rayel or Sixma play it out live.

Hailed by Armin van Buuren as “the future of trance music,” Andrew Rayel (real name: Andrei Rata) is a classically trained electronic dance music DJ and producer from Moldova often referred to as the “modern-day Mozart.” As a DJ, Rayel exudes an unbridled enthusiasm for the music he plays and his onstage performances are electric and filled with physical energy. Drenched in a well-earned sweat after every set, Rayel earns his position as a bandleader, stirring up his crowds’ passion as much with his music selection as with his bodily vigor. He has DJ’d the world’s biggest festivals, including: Ultra Music Festival in Miami, TomorrowLand in Belgium and TomorrowWorld in Atlanta, Stereosonic in Australia, Global Gathering in the UK and other countries, Electric Daisy Carnival in Las Vegas, Electric Zoo in New York, Transmission Festival in various countries, Ministry of Sound in the UK, Dreamstate in San Bernardino, Electronic Family in Amsterdam, Zoukout in Singapore and Together Festival in Thailand. Rayel is a regular on the lineup at various ASOT stages around the world. Nightclub residencies have him performing onstage at super-clubs, including: Marquee Nightclub & Dayclub in Las Vegas, Marquee and LAVO in New York, Ushuaïa Beach Club in Ibiza, Zouk in Singapore and Kuala Lumpur, Escape in Amsterdam and Ministry of Sound in London.

The Netherlands’ Mark Sixma is a young electronic dance music DJ and producer with a knack for melody. Hailing from the Dutch town of Breda – birthplace of Tiësto – Sixma has a background in classical piano like his label mate and good friend, Andrew Rayel. Sixma’s earliest releases included “Freak Electrique” and “Techmatic” and he came to embrace the sub-genre of trance with full gusto. Sixma’s release, “Destination 6,” was spotlighted by Armin van Buuren for the latter’s internationally syndicated radio show, A State of Trance (ASOT), as the “Tune of the Week.” From there, the track gained whole-hearted support within the global community of club and festival DJs. Sixma’s “Fade 2 Black” was also selected for an ASOT “Tune of the Week,” and today, Sixma has numerous releases on Armada Music, Black Hole Recordings and now, inHarmony Music.

Launched in September, 2017, inHarmony Music is the record label headed by Andrew Rayel and distributed by Armada Music. As label chief and head of A&R for inHarmony Music, Rayel is the key decision-maker when it comes to signing new artists and music. Fulfilling a lifelong dream while on his never-ending career quest, Rayel is now able to do for new artists what Armin van Buuren did for Rayel years ago. The circle is complete and there will be an abundant supply of lovingly curated new music ahead.