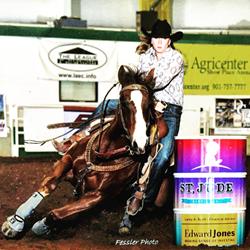 Not only did he stop ducking the second barrel, but he has not required a joint injection in his front end for almost 3 years.

Blue DiamondZan Gold, aka Zan, battled lameness in his front legs, particularly his right front fetlock joint. Over the years he was treated frequently with joint injections however they only gave him comfort for three to six weeks at a time. As a barrel racing Quarter Horse, when Zan began ducking the second barrel owner Ashley knew there was a major problem.

Dr. Thoni extracted a small sample of adipose tissue, commonly referred to as fat, from Zan’s tailhead. When done correctly, this procedure is very quick with minimal, if any, scarring. The horse does not require sedation and recovers quickly. The adipose tissue was sent for processing at VetStem’s laboratory in San Diego, California. Once processed, a quality control check was performed, and the injectable doses of Zan’s stem cells were sent back to Dr. Thoni. Dr. Thoni injected the cells in and around Zan’s fetlock joints and injured tendons.

Three months later Dr. Thoni recommended a second round of injections. In May of 2015 Zan’s stem cells were once again shipped overnight to Dr. Thoni for injection. VetStem had retained a bank of stored cells from Zan’s initial collection, so this time he did not have to undergo any surgical procedures. The stored cells were used to culture, or grow, additional stem cell doses. The banked cells enable VetStem to create a lifetime supply of Zan’s own stem cells for additional treatments in the future.

Following his second round of stem cell injections, owner Ashley reports that she was “back running him in no time.” Zan’s injuries responded so well to his stem cell injections that Ashley said, “Not only did he stop ducking the second barrel, but he has not required a joint injection in his front end for almost 3 years.” She also stated that she has “been so pleased with the outcome” and that Zan “is so much stronger and clocking better than he ever did!”

Now, almost three years after Zan’s initial treatment with stem cells, new front leg injuries have begun to affect his performance again. Fortunately, Ashley has maintained Zan’s stem cell bank over the years and is able to receive doses to treat Zan once again. Zan received another stem cell treatment on November 2nd, 2017, with the hope that this treatment will be as effective as his first. Zan is a great example of why maintaining a stem cell bank is important. Animals may require multiple treatments throughout their lifetime, especially performance horses like Zan. We hope the best for Zan and Ashley.

Stem cells are regenerative cells that can differentiate into many tissue types; they are able to reduce pain and inflammation, help to restore range of motion and stimulate regeneration of tendon, ligament, and joint tissues. In a clinical case series using VetStem Regenerative Cell Therapy in horses with tendon and ligament and joint injuries it was found that regenerative cell therapy (adipose-derived stem cells) eliminated lameness and allowed horses to return to full work.