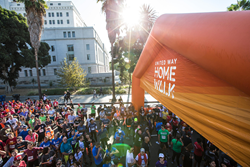 This year’s top individual fundraiser was Lisa Alexander from SoCalGas, and the top team fundraiser was SoCalGas with more than $108,000 in contributions. Over the past ten years, HomeWalk has raised over $7.6 million, which directly helped to bring 18,000 of our homeless neighbors home for good. This year’s HomeWalk raised more than $1 million, thanks in part to the Conrad N. Hilton Foundation Challenge – which matched every $5,000 a person or team raised with another $5,000.

“United Way has been leading the fight to end homelessness in L.A. County and we remain deeply committed to continuing that fight until all of our homeless neighbors have a safe and permanent home,” said Elise Buik, President and CEO of United Way of Greater Los Angeles. “It’s time for everyone to say yes to housing because while we might have an unprecedented amount of funds to build permanent supportive housing, thanks to Prop HHH and Measure H, we can’t actually build them without everyone’s support.”

This year’s HomeWalk came on the heels of the passage of Prop HHH and Measure H, which will bring $4.7 billion for building supportive housing and homeless services in Los Angeles County over the next ten years. During the event, United Way also announced its Yes to Housing initiative. Yes to Housing is a countywide campaign that will partner with community leaders to build momentum for proposed supportive housing, which is critical to ending chronic homelessness.

There are currently more than 57,000 individuals, families, and veterans suffering from homelessness in Los Angeles County – of which only 27% live in Metro Los Angeles.

The 11th annual HomeWalk wouldn’t be possible without support from its sponsors – allowing 100% of funds raised from participants to go directly back into the community. This year’s sponsors include recurring Presenting Sponsor: the Conrad N. Hilton Foundation, VIP Sponsors, AECOM and the Annenberg Foundation, as well as Major Sponsors including AEG, Dignity Health, JPMorgan Chase, SoCalGas, and Torrance Refining Company.

Hi-res images from this year’s HomeWalk are available for download here.

About United Way Greater Los Angeles:
United Way of Greater Los Angeles is a nonprofit organization fighting to end homelessness and poverty by providing students with support needed to graduate high school prepared for college and the workforce, providing housing for our homeless neighbors, and helping hard-working families become financially stable. United Way identifies the root causes of poverty and works strategically to solve them by building alliances across all sectors, funding targeted programs and advocating for change. For more information, visit http://www.unitedwayla.org.

United Way of Greater Los Angeles is leading the fight to end homelessness and poverty in L.A. County.