Author Doris Marie Davis’s Newly Released “Nobody Small” is the Tale of a Dwarf Who Braves a Judgmental World in a Quest to Find His Lost Parents, a New Home, and Love

“Nobody Small” from Christian Faith Publishing author Doris Marie Davis is the story of a dwarf named Nobody Small. Despite his small stature and young age, Nobody departs on a journey to find the parents who abandoned him as an infant, answers, and love. 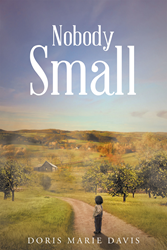 “Nobody Small”: the tale of abandoned dwarf and his search for his lost family. “Nobody Small” is the creation of published author, Doris Marie Davis. Doris Marie Davis is a retired professional artist, interior designer, pianist, modern dance instructor, and a five-year martial arts student. A devout Christian and ordained minister since 2008, she now writes Christian novels for all ages to spread the Word of God. She also prays that her books will open the eyes of those who seek and need the Lord. With a BS and MFA degree in art education, Doris taught for thirty years in Baltimore City. She has also exhibited her artwork in several art shows, including her One-Woman Art Exhibit 1991. She has sold numerous paintings and other works of art. Doris’ first trilogy, “Throughout It All”, was published in 2005, 2006, and 2007. It is a fictionalized autobiography of her traumatic life as a multiracial, multitalented woman who overcame crushing obstacles. Throughout it all, she depended entirely on God. Doris Marie was born in New York City in 1938 as the survivor of twin girls. She has two sons, seven grandchildren, and two great-grandsons. She now resides in Southern Pines, North Carolina where she plans to live out her retired life writing about peace and happiness with the Lord.

“Sincere and serious in his search for love, a new family, and home, he prays for closure every day. Unsure of his future, being so young and so small, he relentlessly braves the toughest trials in his urgent quest, surpassing all odds of survival in a highly judgmental world.” --Doris Marie Davis

Published by Christian Faith Publishing, Doris Marie Davis’ new book is the story of a young dwarf’s quest for love.

Nobody Small is a curious dwarf with a tenacious drive and unyielding loyalty to God. As an infant, he was abandoned. Although reared by loving foster parents, he yearns to know what prompted his parents’ decision as ponders the rationale of such an inhumane act. In his search for love, his lost family, and a new home, he relentlessly braves the toughest trials in his urgent quest. Despite his young age and small stature, he surpasses all odds.

After many weary days of sleeping anywhere his tiny frame would fit and scavenging discarded food, he finally discovers a large white house with a brown door. Inside, he meets Sally, who has an adorable cat named Momar. Her grandchildren soon expose Nobody to unimaginable sights and sounds as they take him on a long walk to fulfill their itchy desire to explore an old church under renovation.

Consumers can purchase “Nobody Small” at traditional brick & mortar bookstores, or online at Amazon.com, Apple iTunes store, Kobo or Barnes and Noble.

For additional information or inquiries about “Nobody Small”, contact the Christian Faith Publishing media department at 866-554-0919.