In the Midst of Earthquakes, Scandals and Politics, World Vasectomy Day Sets a New Precedent for Masculinity

World Vasectomy Day makes history this week with a 24-hour 'vasectomy-athon' and a major public event in Mexico City featuring live vasectomies, discussion panels, a lucha libre fight and concerts. With 1,200 providers in 50+ countries, this will be the largest male-oriented family planning event ever. 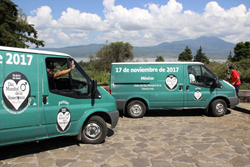 In the midst of political tension, a year of striking sexual abuse revelations in male-dominated industries and a catastrophic natural disaster, the fifth anniversary of World Vasectomy Day - the largest male-focused family planning event in history - will redefine responsible masculinity from its headquarters in Mexico City.

Perhaps more damaging is the continuing disparity between men and women all over the world and the ongoing debate of their respective roles in society. With a year of headlines covering men abusing their positions of power, there has never been a more prescient time for an international movement to cultivate positive masculinity.

Coinciding with the 40th anniversary of family planning in Mexico, an entire week’s worth of vasectomies and events have been organized. On November 17, World Vasectomy Day will be celebrated in over 50 countries with a 24-hour live-streamed vasectomy-athon, including vasectomies, conversations and media from its headquarters in Mexico. Worldwide, it is expected that over 15,000 vasectomies will be performed by 1,200 vasectomists in honor of World Vasectomy Day. The broadcast will e-travel from country to country in an effort to unite a global movement committed to celebrating responsible masculinity and gender equity in family planning.

“For us, it’s incredibly significant and important that this year will be celebrated in Mexico, in November, World Vasectomy Day, as it coincides with the fact that this year is the fortieth anniversary of the first family planning program in our country,” said Dr. Eduardo Pesquiera, Director General of CNEGSR.

“WVD gives us the opportunity to invite more men into the family planning space, which has too long been dominated by women,” said Ana Karina De la Vega Millor, Country Director of DKT Mexico.

“In helping to shoulder responsibility for family planning, men become heroes to their partners, to their families and to our future,” said World Vasectomy Day co-founder Jonathan Stack.

“I have six children. It was time for me to do this,” said Agustín Villa Martinez, a security guard, right after his procedure. “I had been thinking about it for a while, but I couldn’t bring myself to do it, because I thought it would hurt. I was scared. I asked for information about the procedure and they gave me all the answers. So I finally found the courage to do it. Now I feel free, I’m ready for anything now. I’ve very grateful and I feel great.”

About World Vasectomy Day: Founded in 2013 and held annually in November, World Vasectomy Day (WVD) has been hosted in Kenya, Indonesia, the US and Australia, to date. With more than 1,000 participating vasectomy providers in 50+ countries doing upwards of 10,000 vasectomies a year, WVD is the largest male-focused family planning event in history.

About CNEGSR: The National Center of Gender Equity and Reproductive Health is the governing body of the Mexican Ministry of Health that incorporates a gender perspective in public health. It strives to improve the sexual and reproductive health of the population through programs and actions based on scientific evidence, best practices and national health needs in a framework of social participation and respect for human rights.

About DKT Mexico: DKT Mexico offers an increasingly wide range of contraceptives and works with distributors that stock supermarkets, drugstores and wholesalers to ensure that people from rural areas have easy access to contraceptives. Much of DKT Mexico’s programming is focused on increasing young people’s knowledge of and access to IUDs and implants. Its condom brand, Prudence, is the top-selling condom brand in Mexico. In 2016, DKT launched DKT Red, a network of youth-friendly, high-quality clinics throughout the country, promoting the use of contraception in bold and creative ways that seek to reduce stigma and address difficult subjects.

About no-scalpel vasectomy: The tube connecting the testicle to the urethra, called the vas deferens, is cut and sealed to prevent sperm from leaving. After numbing, one or two small punctures are made on the scrotum, small enough that it does not require stitches. Sperm is then reabsorbed into the body – the same thing that happens if a man hasn’t ejaculated in several days. The whole procedure takes about 15-20 minutes.

Hormones are disbursed through a different system, not the vas deferens, so testosterone levels, sex drive and erections are completely unaffected by vasectomies. Ejaculate is mostly comprised of seminal fluid; removing sperm from semen only decreases the volume of ejaculate by about 5%. Though reversals are possible, their success is not guaranteed, so a vasectomy should be considered a permanent procedure.