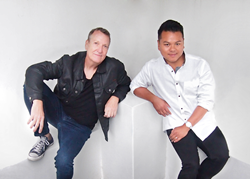 Tim Rosta and Vat Tann have been tapped to develop and manage 420TV's advertising vehicle.

As the acceptance of cannabis continues to grow around the world, both medicinally and recreationally, this burgeoning industry has precious few opportunities to advertise, let alone on television, so we are creating that opportunity with 420TV in a top-quality, 4K video setting.

“As the acceptance of cannabis continues to grow around the world, both medicinally and recreationally, this burgeoning industry has precious few opportunities to advertise, let alone on television, so we are creating that opportunity with 420TV in a top-quality, 4K video setting. We are also giving mainstream advertisers the chance to reach a very lucrative audience of viewers, a largely millennial population comprised of both the curious and converted,” explained Lee. “Tim Rosta and Vat Tann are just the right team to represent 420TV, as they have their pulses on both pop culture and the world of cannabis.”

Rosta+Tann will develop and manage the new channel’s advertising vehicle. The agency will use its profound understanding of the cannabis industry and culture to create a rich array of platforms for advertisers, including on-air, online and on-the-ground opportunities such as in-show placements, custom branded content, live events and experiential marketing solutions.

Having worked with MTV, E!, Disney and other entertainment behemoths, Tim Rosta and Vat Tann are excited to bring this first-to-market opportunity to advertisers who want to be part of a modern lifestyle that embraces cannabis as “pop culture not pot culture.”

"Fueled by the rise of non-linear media consumption and estimates that the total demand for cannabis in the U.S. is expected to exceed $50 billion in just a few years, 420TV is perfectly poised at the intersection of two rapidly expanding industries,” said Tann.

While Rosta+Tann take on 420TV’s unique advertising opportunities, former Netflix Head of Product Creative Nick Nelson and team have been tasked with spearheading the channel’s rollout across platforms. Nelson, who serves as Head of Product and Innovation for OWNZONES Media Network, will be leading the launch of 420TV onto a variety of different devices and platforms with a focus on using strong visual imagery to highlight great content and a clean, modern user interface to help audiences discover it.

Nelson brings a wealth of valuable experience having served as Head of Product Creative at Netflix from 2012 to 2016. During the evolutionary years of the streaming giant, Nelson grew his Netflix team from 5 to 60+ employees to support the company’s increasing products, original content and international expansion. He helped transform Netflix’s Creative Services department from a process-driven acquisition operation to a highly strategic, cross-functional team focused on A/B testing and productizing the Netflix user experience globally.

Added Nelson: “With 420TV, we are developing a content-first, immersive and high-quality consumer experience that seeks to provide 420TV’s audience with an authentic home of premium content for the cannabis community. To that end, we have enlisted the talents of Dan Nistor, OWNZONES’ Senior UX & UI Designer, and the consulting services of Mark Kawano, a marquee U.S. designer with a long history developing user experiences for Apple.”

While 420TV will launch on 420TV.com and its mobile applications, it will quickly expand to other devices and through OWNZONES’ worldwide multi-platform distribution network. OWNZONES is a VOD platform with streaming video powered by OWNZONES Media Network, which produces and distributes content through its worldwide networks. Its distribution partners include Comcast, Amazon, Roku and Apple TV, among others.

About 420TV
Debuting in January 2018, and initially available through 420TV.com and its mobile applications, 420TV is a premium 4K video-on-demand network devoted to all things cannabis. It will deliver original programming produced exclusively for the multi-platform channel, in addition to acquired long- and short-form entertainment. Content categories in development include news, information, food, fashion, comedy, music and animation, as well as acquired feature films, documentaries, music and live streaming events. 420TV was developed by 420 Entertainment Group, comprised of OWNZONES Media Network, Genesis Media and Alex Nahai Enterprises. For more information, please follow http://www.420TV.com.

Former Netflix Head of Product Creative Nick Nelson and team have been tasked with spearheading 420TV's rollout across platforms.