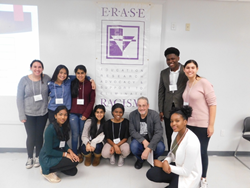 Students from Hewlett-Woodmere School district along with Dr. David Rifkind, head of the Youth Leadership group

There are so many unique issues and situations that people face because of structural/institutional racism in our community and experiencing this event gave me more perspective on my own district's problems.

What happens when you bring together nearly 70 of Long Island's brightest students to discuss leadership and racial inequities?

A diverse group of students from both Nassau and Suffolk County convened on Friday, November 10, 2017 at Nassau BOCES Joseph M. Barry Career & Technical Education Center for ERASE Racism's Student Voices Campaign: Long Island's Leaders of Tomorrow Conference. The Student Voices Campaign is ERASE Racism's program to uplift the voices of students; equipping them with resources that cultivate their leadership skills in advocacy and cross cultural relations.

The morning session of the conference delved into the history of Long Island, including the discriminatory federal government policies and local housing practices that famously created Levittown, the first mass-produced suburb. Levittown was designed to exclude non-white residents. Continuing widespread discriminatory housing practices has resulted in Long Island being one of the most racially segregated metropolitan regions in the United States, according to U.S. Census data. The session also addressed public school segregation in the region, resulting from housing segregation. Through an excerpt from the film, "Race: The Power of an Illusion", students were surprised to learn that race is a social construct and that science has turned up no genetic markers that distinguish one so-called race from another; yet the impact from discrimination based on race has very real and devastating consequences.

Education Equity Organizer Nyah Berg said, "My main goal when creating this conference, was to create a program that would leave students feeling empowered, confident and inspired to create positive change in their communities and schools." She continued, " Based on immediate feedback I believe we did that for those who attended. I am so excited about continuing this work in the upcoming new year with many of the students who attended!"

Feedback from students supported Berg’s assumption. One student stated, "I enjoyed learning about the experiences of different people from across Long Island. There are so many unique issues and situations that people face because of structural/institutional racism in our community and experiencing this event gave me more perspective on my own district's problems."

In the afternoon, students learned about teen leaders such as literary activist Marley Dias and the civil rights legend Claudette Colvin. Students saw student leadership up close in the student created "Laundry City", a performance by the EPIC Theatre Ensemble that explored segregation in public education and housing. The event concluded with students using their newly polished leadership skills to create action plans for issues impacting their communities and schools. For example, Gabrielle Barnes, a high school student from Hewlett-Woodmere High School, brainstormed ways to advocate increased teacher diversity in her district with her group members.

“We’re giving you information that’s going to help you push back against the myths,” stated Elaine Gross, president and founder of ERASE Racism.

About ERASE Racism: ERASE Racism is a regional organization that leads public policy advocacy campaigns and related programmatic initiatives to promote racial equity in areas such as housing and public school education. It engages in a variety of research, education, community organizing, and policy advocacy to identify and address institutional and structural racism, primarily on Long Island. ERASE Racism's goal is transformed, integrated communities in which no-one is limited by race or ethnicity.