W. J. Eaton’s newly released “Samson” is a touching book about a man who has lost a father during the World War II and has become a Christian amid crises in life.

“Samson” from Christian Faith Publishing author W.J. Eaton is a captivating story of a man dealing with problems like the death of his father who was a kamikaze pilot during the World War II, two failed marriages, and the plans of his jealous father-in-law to take over Goliath, the largest cruise ship in the world. 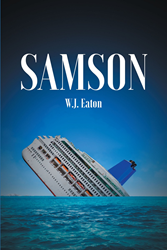 “Samson”: an exciting story of Akihiko Takeda—who comes from an ancient Samurai family—and his attempt to save the cruise ship Goliath and the people on board from pirates sent by Mr. Ike, his father-in-law who is jealous of his success. “Samson” is the creation of published author, W. J. Eaton, a retired social worker who has been writing for many years.

Eaton shares, “Izanami suddenly became very quiet. She realized that Akihiko had begun to see through her façade. She got up from the bed and went into the bathroom. Soon Akihiko could hear the water running in the shower. He lay back on the bed and sighed. He had come to love Izanami very much, but he could no longer trust her. He understood that he needed to make a choice between his wealth and his wife. Unfortunately, Izanami would lose that contest. He vowed to himself that he would separate from her and her father. He knew it was going to be easier to accomplish the former. Izanami would protest, but with a generous settlement, she’d relent. Her father would be a different matter. Akihiko had come to understand that Mr. Ike had been masterminding a covert hostile takeover of him for some time. Akihiko was prepared to fight long and hard to prevent that from happening.”

Published by Christian Faith Publishing, W.J. Eaton’s engaging work is a story of a man listening to God’s call and obeying his commands; the main character Akihiko Takeda is someone who sees life’s beauty despite numerous problems and various challenges along the way because he lets God take control.

This page-turner also paints a picture of how jealousy can make someone do bad things to good people, destroying relationships and letting evil prevail over one’s conscience.

Consumers can purchase“Samson” at traditional brick & mortar bookstores, or online at Amazon.com, Apple iTunes store, Kobo or Barnes and Noble.

For additional information or inquiries about “Samson”, contact the Christian Faith Publishing media department at 866-554-0919.