Among the procedures trending, according to new cosmetic procedure statistics, are fat transfer, injectables for fat reduction, fat freezing and skin tightening. Dr. Richard Buckley comments on specific technologies for these procedures in high demand. 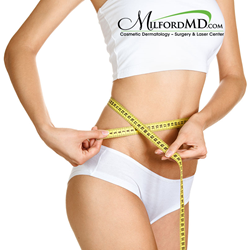 Dr. Buckley comments on specific technologies for cosmetic procedures in high demand, according to new statistics, such as fat transfer, injectables for fat reduction, fat freezing and skin tightening

The spark fueling the trend in fat transfer is its use in body sculpting. We’ve improved our techniques for taking fat from one place in the body, such as the love handles, and transferring it to another—perhaps to make the breasts or buttocks larger. It’s a win-win.

Transferring one’s own fat from one area of the body to another is among the leading trends in cosmetic medicine, according to 2017 statistics released by the American Society of Plastic Surgeons (ASPS). Other cosmetic options experiencing leaps in popularity in 2017 include injections, such as Kybella, that target areas, including under the chin, for fat reduction. And technologies that noninvasively freeze fat, including CoolSculpting, and tighten skin, such as ThermiTight continue to show gains, according to ASPS numbers.

“It’s interesting that fat transfer, a procedure we have performed for years, only recently has grown in popularity,” says Dr. Richard Buckley, who is medical director of MilfordMD Cosmetic Dermatology Surgery & Laser Center, in Milford, Penn. “The spark fueling the trend in fat transfer is its use in body sculpting. We’ve improved our techniques for taking fat from one place in the body, such as the love handles, and transferring it to another—perhaps to make the breasts or buttocks larger or to fill-in an aging face or hands. It’s a win-win.”

In fact, using fat grafting, or transfer, to augment the buttocks grew 26 percent from 2015 to 2016 and using fat transferred from another area to enlarge the breasts grew a whopping 72 percent in popularity. “Fat transfer often is a great option for women who want their breasts to be about a cup size larger per treatment session. It’s breast augmentation without the implants and has the added benefit of permanent unwanted fat reduction from another area, such as the abdomen or thighs,” Dr. Buckley says.

Injection-based approaches that focus on specific areas, such as under the chin, also increased in popularity, by 18 percent, according to ASPS. “Kybella isn’t liposuction or a noninvasive fat reduction device, like CoolSculpting. It’s completely different. It’s an injectable that delivers deoxycholic acid, which occurs naturally in the body, to the double chin and destroys the fat under the chin for good,” Dr. Buckley says. “We weren’t surprised to see the impressive rise in demand for these novel injection-based approaches. They can be done in the office, and patients emerge with a more youthfully sculpted and defined chin and neck area. That can make a big difference in their looks.”

Coming in at 5 percent increases for 2016, compared to 2015, were non-invasive fat reduction procedures that freeze fat, as well as noninvasive skin tightening procedures, according to the newly released statistics. “Fat freezing with CoolSculpting has been in high demand for years now. The great news for patients is the technology continues to advance. Today, we can treat more body areas at the same time with DualSculpting technology, and treat patients in nearly half the time with CoolSculpting’s CoolAdvantage applicator,” Dr. Buckley says. “It’s no wonder patients who are within 15 to 20 pounds of their ideal weight and have hard-to-get-rid-of fat pockets want this technology.”

Nonsurgical skin tightening technology has advanced considerably, according to the cosmetic surgeon. Examples of devices that tighten skin on the face and body include ThermiTight and ThermiSmooth, which use radiofrequency technology. “We use ThermiTight by inserting a tiny probe that gently heats tissue under the skin. The controlled thermal energy tightens skin and reduces sagging around the neck, arms, abdomen, thighs and knees,” Dr. Buckley says. “ThermiSmooth also relies on radiofrequency energy to shrink and tighten tissue, but the device is totally noninvasive. It does its job of shrinking the tissue from outside the body. In three to six ThermiSmooth treatments, we can target sagging tissue around the face, with no downtime.”

These were not the only cosmetic options to increase in popularity in 2016. There were 17.1 million surgical and minimally invasive cosmetic procedures performed by ASPS-affiliated plastic surgeons in 2016, which is the 3 percent gain from the previous year. “Cosmetic surgery continues to grow and evolve into options that help patients look more natural, with less downtime,” Dr. Buckley says.