Bonus depreciation as described by the National Business Aviation Association (also known as accelerated asset depreciation) included in President Trump's new Tax package has been shown by The Private Jet Company to allow business owners to benefit from the available depreciation of capital expenditures, including the purchase of new aircraft used in support of their company or enterprise. 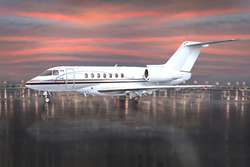 We can help buyers weigh the pros and cons of purchasing private aircraft this year under 50 percent depreciation, versus paying higher transaction prices once 100 percent first-year depreciation may be available.

The Private Jet Company, a leading private aircraft broker sees the inclusion of significant changes to bonus depreciation schedules in the tax proposal released by Republican lawmakers last week as a major tax advantage for buyers of private aircraft.

Bonus depreciation (also known as accelerated asset depreciation) allows business owners to realize the available depreciation benefits of capital expenditures, including the purchase of new aircraft used in support of their company or enterprise.

Under the current schedule passed in Congress in 2015, the percentage of depreciation that businesses could apply in the first year will be reduced from 50 percent to 40 percent in 2018. The “Tax Cuts and Jobs Act” introduced in Congress earlier this month would increase the amount of available first-year depreciation to 100 percent and extend the eligible timeframe through 2023, after which time it would be eligible for renewal.

Daniel Jennings, President and CEO of The Private Jet Company, believes the expansion of available 1st. year depreciation of new aircraft purchases will motivate businesses to acquire a private jet as opposed to chartering without tax advantages. "Bonus depreciation is a tax measure with prior proven economic incentives to encourage purchases of new business equipment and promote additional investment by companies in their overall growth," he noted.

Jennings also lauded bonus depreciation as a measure to deliver long-term economic stimulus by allowing companies quicker access to newer aircraft, making them more competitive. "President Trump is a decades-long user and advocate for utilizing private aircraft to conduct business," he continued. "Long before he took the oath of office, the president’s multiple enterprises have directly benefitted from the unparalleled speed, flexibility, security, and efficiency available using private flights."

"We're currently seeing great deals in the private jet marketplace and there's no reason to doubt that prices will likely increase by the time a new depreciation schedule may be enacted," he continued. "The Private Jet Company can help buyers weigh the pros and cons of purchasing private aircraft this year under 50 percent depreciation, versus paying higher transaction prices once 100 percent first-year depreciation may be available."

At time of publication, the tax proposal is under consideration by the House Ways and Means Committee, with lawmakers hoping to submit the measure to the U.S. Senate before the Thanksgiving holiday, and have the final approved bill submitted for President Trump’s signature before the end of the year.