'Truth' is Top Word, 'Weinstein Effect' the Top Phrase and 'Xi Jinping' the Top Name in Global English for 2017

"Since the turn of the century, the Global Language Monitor has been naming the words of global English that have had the most profound influence upon the language, the culture, and/or the world of the 21st century," said Paul JJ Payack, President, and Chief Word Analyst. "Our goal remains to detect these small changes in the language that often presage titanic shifts in the way humans communicate." 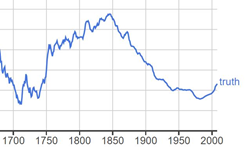 Since the turn of the century, the Global Language Monitor has been naming the words of global English that have had the most profound influence upon the language, the culture, and/or the world of the 21st century, said Paul JJ Payack, President, and Chief Word Analyst.

Truth has been named the 2017 Word of the Year for Global English (#WOTY2017) by the Global Language Monitor, in its eighteenth annual global analysis. In addition, the Weinstein Effect has been named the Top Phrase and Chinese leader Xi Jingping the Top Name of 2017.

"Since the turn of the century, the Global Language Monitor has been naming the words of global English that have had the most profound influence upon the language, the culture, and/or the world of the 21st century," said Paul JJ Payack, President, and Chief Word Analyst.

"GLM 's methodology, true to its Silicon Valley heritage, is to examine the totality of Global English with the tools now available to better understand the underlying trends that shape our words and, hence, our world.

Our goal remains to detect these small changes in the language that often presage titanic shifts in the way humans communicate."

In the recent past, some of the shifts first noted by the trend and narrative-tracking techniques of GLM include:

o The use of number sequences as clearly defined words (Y2k, Web 2.0)

o The rise of the Narrative presaging the rise of ‘fake news’ and the decline of ‘truth-based’ journalism. (2006)

o The mounting impact of the 'sustainability' and 'Green' movements (2006)

o The Rise of China as the most significant (and de-stabilizing) event of the 21st century, thus far. (2008)

o Unveiling the racist underpinnings behind the rise of Fake News.

GLM has used these technologies to track political and social trends.

The eighteenth year of the 21st century provided words that accompanied the outsized geopolitical events of the age:  nuclear diplomacy, shattered trade alliances, the rise (and re-emergence) of nationalism in various parts of the planet, as well as varying degrees of 'wokeness' and intense debates over the role of the past in the present-day world.  Perhaps, most surprisingly, a debate over the nature of truth worthy of Athenian philosophers, of 12th-century Schoolmen -- and the 18th c. Founders is currently quite the rage.

1. Truth -- Let's face it.  The conversation is all about truth, or lack thereof.

2. Narrative -- As GLM noted in ’08, Narratives began replacing facts in politics; a harbinger to 'fake news'.

4. Post-Truth -- Objective facts are less influential than appeals to emotion or the prevailing narrative.

5. Woke -- Awakening to issues of social and racial justice.

7. Blessee -- [RSA, South Africa] Those who are shown financial favor through a 'Sugar Daddy'.

8. Non-binary -- Gender identity defined as neither male nor female.

9. Anthropocene -- The current geological time period where human activities have had a major environmental impact on the Earth.

10. Latinx - Neologism for the Hispanic heritage of any stripe.

11. Ransomware -- A type of malware where targeted sites are 'captured' and rendered useless until a ransom is paid to the hackers.

12. Tradie -- [Australia] Short for any worker in the trades: electricians (sparkies), truckers (truckies), chippies (carpenter) and the like.

14. Covfefe -- The Trumpian Typo Heard 'Round the world.

16. Appropriation (Cultural) -- Now refers to the exploitation of an 'ethnic' culture by those of white European heritage.

1. Weinstein Effect -- (#MeToo) Emboldened women across the globe confront those who have been abused them in their past.

2. Nuclear Option -- The use of nuclear weapons by either side in the on-going and decades-long North Korean standoff.

3. Deep State -- Entrenched bureaucracies, beholden to no one, controlling the ship of state with little concern for elected officials.  In effect, a ‘Shadow’ government.

4. For Real (FR) -- [Indian] It took a half a century for the hip lingo of Venice Beach to proliferate to the call centers of India as FR.

5. Robot Apocalypse -- The oncoming usurpation of Humankind by robots and other advanced forms of Artificial Intelligence.

6. Fake News -- A higher level (and far more dangerous method controlling the news) through special relationships, the tight control of events, planting sources, and keeping the actual facts to a tight inner circle.

7. Lean Into -- Being totally committed (or lean into) a cause, an initiative, or career choice.

8. Non-binary -- Gender identity defined as neither male nor female.

9. Memory Care -- Euphemism for treating Alzheimer and other forms of dementia.

10. Cultural Appropriation -- Now refers to the exploitation of an 'ethnic' culture by those of white European heritage.

1. Xi Jinping -- General Secretary of the Communist Party of China.

3. Pope Francis -- Jorge Mario Bergoglio, the 266th Pope of the Catholic Church, the Bishop of Rome, and sovereign of Vatican City.

6. Theresa May -- Prime Minister of the United Kingdom.

The Top Words, Phrases, and Names since the Turn of the Century

Methodology:  The words are culled from throughout the English-speaking world, which now numbers more than 2.35 billion speakers (January 2018 estimate) GLM employs its NarrativeTracker technologies for global Internet and social media analysis. NarrativeTracker is based on global discourse, providing a real-time, accurate picture about any topic, at any point in time. NarrativeTracker analyzes the Internet, blogosphere, the top 350,000 print and electronic global media, as well as new social media sources as they emerge.

About the Global Language Monitor

In 2003, The Global Language Monitor (GLM) was founded in Silicon Valley by Paul J.J. Payack on the understanding that new technologies and techniques were necessary for truly understanding the world of Big Data, as it is now known. Previous to this Payack was the founding president at yourDictionary.com, and a senior executive for a number of leading high tech companies.

The BBC Chose GLM to Choose the Top Words of the

The Global Language MonitorAt the Intersection Between Technology and the Word