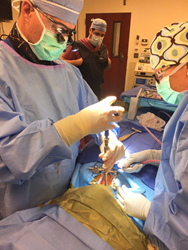 The newly updated angled driver further enhances the ease-of-use and simplicity of the system.

Dr. McFarland performed the surgery on a 68 year old female patient - who was experiencing radiating pain in both her shoulders and upper arms, along with neck pain and discomfort. She noticed the pain was much worse in the mornings and often radiated past her elbows, especially on the right side. MRI revealed a central broad based disc protrusion at C4-5, which resulted in moderate to severe central stenosis. Additionally, the MRI revealed a moderate posterolateral bone disc complex combined with an annular bulge at C5-6, which resulted in right foraminal narrowing and moderate central stenosis. Prior to undergoing surgery, the patient had failed conservative treatments, including epidural steroid injections, anti-inflammatory medications and home exercise programs.

Dr. McFarland remarked on the advantages of the A-CIFT SoloFuse-P and angled driver, crediting the "zero profile implant design" in providing "a great option for outpatient surgery." "The newly updated angled driver further enhances the ease-of-use and simplicity of the system," he said.

Dr. McFarland currently practices at the Orthopaedic & Spine Center in Newport News, Va., where he focuses primarily on the care and treatment of injuries and disorders of the spine. Dr. McFarland graduated from Oklahoma State University Medical School in 1999. He completed his residency in orthopedic surgery at Ohio University and went on to complete an Orthopedic Spine Surgery Fellowship at the Florida Spine Institute in Clearwater, Fla. Dr. McFarland is a member of the American Academy of Orthopedic Surgeons and the American College of Osteopathic Surgeons. He received the “Graduating Physician Academic Excellence Award" and his research includes studies on vertebral compression fracture outcomes. Dr. McFarland has also been recognized as a “Hampton Roads Top Doc” for the past five years in a survey of physicians conducted by Coastal Virginia Magazine, among other honors.