When Mother Nature hands out cold weather, Vermonters make snow with it, and November’s chilly temperatures coupled with the Green Mountain State’s world-class snowmaking power allowed for Vermont’s resorts to open early and open strong for the 2017-18 season. 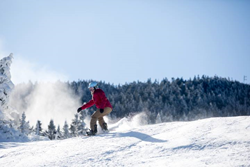 Day One at Killington Resort

When Mother Nature hands out cold weather, Vermonters make snow with it, and November’s chilly temperatures coupled with the Green Mountain State’s world class snowmaking power allowed for Vermont’s resorts to open early and open strong for the 2017-18 season.

Killington Resort stayed true to their legacy by being the first Eastern resort to open on November 8 and Mount Snow Resort took home a new accolade by opening on November 11 with the most open terrain East of the Rockies with 108 acres. Okemo Mountain Resort also began spinning their lifts on November 11. “This was our earliest opening in five years,” said Okemo Vice President and General Manager Bruce Schmidt. Come Thanksgiving weekend, skiers and snowboarders will have access to over half of Vermont’s mountains, with most major resorts opening by Friday, November 24.

Thanks to a successful 2016-17 season, skiers and snowboarders are eager to return to the slopes of Vermont’s alpine resorts this winter. “We’re seeing really strong demand from both the U.S. and Canadian markets,” said Jay Peak Resort’s Director of Communications JJ Toland. “The Toronto ski show posted a record amount of bookings and revenue, virtually selling out the 10-day Ontario break in March. The Boston Snowsports Expo experienced that type of compression with December and February timeframes selling out and on the season pass front, Jay Peak is pacing 22% ahead in unit sales against the 2016-17 season.”

Thanksgiving in Vermont will once again go down in history as the world’s fastest female ski racers prepare for their return to Killington Resort for the Audi FIS Ski World Cup. Last year, a record breaking 30,000 fans descended upon the Killington Village as Vermonters and visitors alike cheered in unison for the event’s return to the East Coast and Vermont. “When it comes to snowmaking and grooming, we have some of the best team members and tools in the industry to prepare Killington for the winter season and World Cup on Thanksgiving weekend,” said Mike Solimano, President and General Manager of Killington Resort. The free event will take place Thanksgiving weekend, November 24-26.

As one season ends, another begins, and Vermont’s resorts spend each season bettering themselves for the next. New this season, snowmaking upgrades have been made across the state. Investments like Mount Snow Resort’s $30 million-dollar West Lake Water Project, Bolton Valley’s expanded line of guns and hoses, Burke Mountain’s installation of 13,400 feet of new snowmaking pipe, and Stratton Mountain Resort’s switch to electric compressors, which resulted in a 40% decrease in diesel use, all continue to prove that Vermont’s resorts truly are at the forefront of sustainable and efficient resort practices.

While the snowmaking upgrades get skiers and snowboarders on the slopes faster, new RFID gates at Sugarbush Resort and Smugglers’ Notch Resort will get visitors out of the lift line and back on the hill quicker than before. Magic Mountain’s two new lifts, the 170’ Magic Carpet and the base to mid mountain, Green Chair Lift, will open up novice and intermediate terrain to skiers and snowboarders, allowing for a better learning experience and more time spent going down the hill rather than up.

Winter has arrived in the Green Mountain State and Vermont’s resorts are ready and eager to welcome in new faces and old friends for the holidays and beyond. Stay up to date with all winter happenings by receiving Ski Vermont’s daily snow reports.

Vermont’s Resorts are the Place to Call “Home” this Holiday Season: https://skivermont.com/vermonts-resorts-are-the-place-to-call-home-this-holiday-season

Turning Up the Effort and Off the Lights: Sustainable Practices at Vermont Resorts: https://skivermont.com/skivt-blog/2147/2017/09/25/turning-up-the-effort-and-off-the-lights-sustainable-practices-at-vermont-resorts/