A recent study in the journal Herpetologica examines the parental habits of iguanian lizards. While reptiles are typically thought to have little to no parental instincts, this new study lends a different perspective to this previous conclusion. 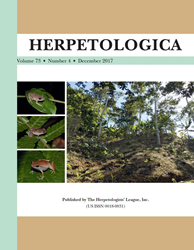 Diverse forms of parental care have long been independently evolving widely in many branches of the tree of life.

Herpetologica – Whereas there is a long history of studying parental care behaviors among a variety of mammalian and avian species, much less is known about innate nurturing among reptiles, such as snakes and lizards. The widely-held view is that reptiles have relatively low levels of parental investment, either abandoning eggs after laying them, or leaving newborn offspring to fend for themselves.. However, new experiments conducted with iguanian lizards add to the growing amount of evidence that parental care is common among many species of reptiles.

Female lizards representing the three species were captured from the desert habitats of New Mexico and Arizona, along with two egg-eating Western Patch-nosed Snakes (Salvadora hexalepis). For the egg-laying species (P. cornutum and P. modestum), staged encounters between lizards and one of the snakes were recorded either in the field or large naturalistic enclosures at different times during each subject’s reproductive activity. For the live-bearing species (P. hernandesi), interactions with the female lizard, prior to and following the birth of her offspring, and a snake were recorded in an experimental enclosure.

During nest construction and egg-laying, female lizards of the oviparous species would defend the nest site until the eggs were sufficiently buried. As the snake approached the next site, the female subject would rush toward the snake, colliding headfirst, and even biting until the snake retreated. The research documented several lizards licking the snake, which he hypothesized to be a mechanism of evaluating the threat level using chemical cues. Females of the live-bearing species did not exhibit similar levels of defensive behavior towards this egg-eating predator, either before or after the birth of their offspring. There was also little apparent postpartum attentiveness by the female lizard towards her offspring, even in the presence of the snake.

The two species of oviparous lizards appeared to guard their nests at those times when the risk of snake predation of the eggs was highest, a form of parental care never before observed in reptiles. The researcher, Wade C. Sherbrooke, noted that “This study illuminates the possibility of more widespread evolutionary experimentation among reptiles in the utility of parental care as a significant part of natural selection in nature. As we know, lineages leading to our species have dramatically benefited as a result of parental care evolving within them. Diverse forms of parental care have long been independently evolving widely in many branches of the tree of life.”