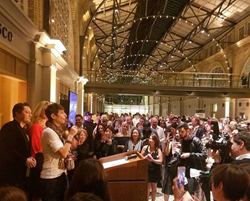 “I was bowled over by the outpouring of support from wineries and my colleagues and peers in the Ferry Building who are generously providing all of the food and wine for the Gala. After a week of giving, it’s our turn to toast and host guests,” said Debbie Zachareas, Gala Chair

Veteran technology-industry CEO Andy M. Miller is challenging donors to support the ChefsGiving Week initiative in raising funds for those affected by recent Northern California fires. ChefsGiving united hundreds of chefs, restaurants and wineries across the country last week in raising money to provide temporary and long-term housing for restaurant workers and low-income communities affected by the devastating fires that burned more than 300 square miles across the Northern California region during October. The fires, among the most damaging in California history, killed dozens of people, displaced thousands more and destroyed numerous homes and businesses, including many restaurants and wineries.

“I’ve been a frequent visitor to Napa, Sonoma and other wine country destinations while living and working for many years in the San Francisco area, and have gained a deep appreciation for the region’s unique and irreplaceable people, communities and cuisine,” says Miller. “Now is the time for anyone who’s ever enjoyed the food, wines and cultural amenities produced there to show their appreciation by helping its residents to recover and rebuild from these tragic events.

”Donations are still being accepted at https://go.fundcru.com/raise/chefsgiving, and Miller encourages donors to contribute generously to help organizers reach their fundraising goal of at least $100,000. ChefsGiving is an all-volunteer effort, and 100 percent of the funds raised will be divided between the Tipping Point Emergency Relief Fund, which directly supports low-income communities affected by the fires and Restaurants Care, an emergency assistance fund created by the California Restaurant Association to support restaurant workers affected by the fires.

Andy Miller, who has served as CEO of Polycom and Tandberg, and in other senior positions for companies including Cisco, IPC Systems and Monster Worldwide, recently founded the Andrew Miller Foundation (AMF) to increase awareness and financial support for under-recognized charitable and non-profit organizations serving children and youth across the San Francisco Bay area. In addition to Miller’s own initial funding, the foundation plans to raise additional financial support from other donors, with all funds raised going directly to selected charities or scholarships.

Miller has more than two decades of executive experience in industry leading technology and telecom companies. As a senior operating executive, he has excelled in focusing on strategic growth areas, leading global expansion, and driving improved profitability. As a director, he has collaborated on successful enterprise communications IPOs, including Gigamon (GIMO).

In addition to guest lecturing at UCLA, USC and Stanford, Andy has spoken at the World Economic Forum in Davos and has given keynote addresses at Microsoft’s Worldwide Mobile Congress and the Aspen Ideas Festival. For more information about the Andrew Miller Foundation see http://andrewmillerfoundation.org/.