Author Richard Gable’s New Book “Valhalla’s Forge” is a Medieval Tale of Knights, Monsters, and a Fearsome Quest to Save the Land from the Ravages of a Murderous Beast

Recent release “Valhalla’s Forge: Book 1 of the Forge Knight Chronicles” from Page Publishing author Richard Gable was inspired by a poem that sparked a yearlong fantasy roleplaying adventure. “Valhalla’s Forge” brings the brave knights and fantastical creatures of the author’s poem to life in this exciting new series. 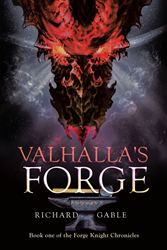 Richard Gable, a facilities supervisor at a hospital in northern Colorado and an avid fantasy role-player for 35 years, has completed his new book “Valhalla’s Forge: Book 1 of the Forge Knight Chronicles,” a riveting fantasy of monsters and heroes in a rugged medieval land.

Richard shares, “Var-Tog, Kryton, Sondergaard, and Aldora, knights newly graduated from the Dragon’s Gauntlet, have found themselves on quest within days after their graduation. Having left the elite training grounds of the Knight Marshals on their way to their first duty station at Fort Holdfast, they encounter a horrendous reptilian creature that seems to be unaffected by sword, ax, or spell. Ignoring all attempts to stop it, the creature seems bent on completing a quest of its own. Now the knights must find the legendary dwarven artifact, the Valhalla’s Forge, with only an ancient poem for their clue, and make the weapons necessary to defeat the creature before further disaster befalls the countryside.”

Published by New York City-based Page Publishing, Richard Gable’s first book in his “Forge Knight Chronicles” details the adventures of a recent group of young graduates from the Dragon’s Gauntlet.

Readers who wish to experience this enthralling work can purchase “Valhalla’s Forge: Book 1 of the Forge Knight Chronicles” at bookstores everywhere, or online at the Apple iTunes store, Kobo, Amazon, Google Play or Barnes and Noble.