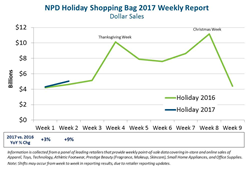 The positive momentum seen in the first week of November 2017 strengthened in the second week. Cumulatively, NPD’s Holiday Shopping Bag shows retail sales for the first two weeks of the season up 6 percent across key general merchandise categories. However, based on the hottest products across the first two weeks, much of the consumer spending is likely still on items for themselves, rather than gifts for others.

“Early season growth demonstrates the consumer’s willingness to spend and spells potential for retail this Holiday,” said NPD’s Chief industry Analyst, Marshal Cohen. “The challenge for retail is to harness the personal need drivers behind this early spending, convert it into a continued desire to spend on more traditional gift items throughout the season, and do so in ways that extends beyond deep discounting.”