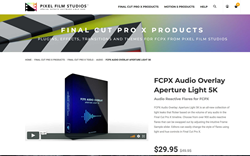 FCPX Audio Overlay: Aperture Light 5K is an all-new collection of light leaks that flicker based on the volume of any audio in the Final Cut Pro X timeline. Choose from over 900 audio reactive flares that can be swapped out by adjusting the intuitive Frame Sample slider. Editors can easily change the style of flares using light and hue controls in Final Cut Pro X.

Switching out overlays has never been easier thanks to FCPX Audio Overlay: Aperture Light 5K. The intuitive Frame Sample slider contains a unique lens flare for each flare and users can swap out flares by simply moving the slider from one frame to another.

FCPX Audio Overlay: Aperture Light 5K responds to the full range of frequencies in the inserted music. Additionally, users can adjust the low and high frequency sliders to isolate a desired range. With these two controls, editors can allow anything from the lowest rumbles to the highest pitches to affect objects in Final Cut Pro.

FCPX Audio Overlay: Aperture Light 5K is shot in beautiful 5K resolution, but comes in a variety of other formats including 4K, 2K and HD. This package is optimized to be light for the customer and intuitive for the user.

After choosing a flare using the Frame Sampler, editors can adjust the stylization of the flare by using controls in the Style and Light Controls sections. Change the blend mode, colors, contrast, saturation, brightness, light reflection and glow using a series of simple sliders and dials.