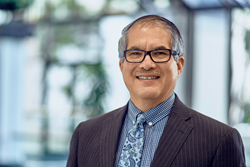 On Friday, December 1, 2017, José Enrique Cavazos, MD, PhD, will be presented with the American Epilepsy Society’s (AES) “2017 Distinguished Service Award” during its annual meeting in Washington, D.C. AES is a medical and scientific society of 4,000 members dedicated to eradicating epilepsy and its consequences.

“I am deeply humbled and honored for being selected the 2017 Distinguished Service Awardee by my core professional society,” said Cavazos. ¨I have been passionate about participating in AES since I attended my first meeting in 1989. It is wonderful to serve in a professional society where so many other amazing scientists and physicians are working eagerly toward the same goal of improving the lives of people with epilepsy.”

Dr. Cavazos’ work in the field of epilepsy includes almost 30 years of research, education and patient care. He helped draft the 2008 law that created the VA Epilepsy Centers of Excellence. He is Professor and Assistant Dean for the MD/PhD Program at The University of Texas Health Science Center at San Antonio, now called UT Health San Antonio™. He has been an active researcher and partner with the NIH and FDA. He has served as an editorial board member of Epilepsy Research and Epilepsy and Behavior. And, he has held numerous leadership roles at AES and the International League Against Epilepsy (ILAE).

Through a series of chance encounters, Dr. Cavazos met Mike Girouard. After multiple discussions, he began consulting in 2009. Ultimately, they, along with others, cofounded Brain Sentinel, Inc. in 2011. Dr. Cavazos was the Principal Investigator of the pivotal clinical trial that led to the FDA de novo clearance of the SPEAC® System, the first FDA-cleared, non-EEG, physiological, signal-based system for seizure monitoring.

Cavazos continued, ¨I accepted the challenge at Brain Sentinel because I believed I could reach more patients with a product to improve a known diagnostic gap in epilepsy care. Those of us that make epilepsy diagnoses decisions must often do so based on imperfect data – reported spells that are often unwitnessed and unreliable. I’m very proud of working with a talented team that has launched new, innovative technology to help minimize the diagnostic gap and improve the health of people with epilepsy.”

“It has been a pleasure working with Dr. Cavazos over the past few years,” said Mike Girouard, CEO of Brain Sentinel. “His deep knowledge of the clinical needs within epilepsy have shaped our research, our product design and our go-to-market strategy,” continued Girouard.

About Brain Sentinel
Brain Sentinel, Inc. is a privately held, medical-device, start-up company based in San Antonio, Texas. The company manufactures and markets its sEMG-based System under the name, the SPEAC® System: the Sensing, Portable sEMG, Analysis and Characterization System. Brain Sentinel is committed to helping people gain better control over their seizures and be heard by their physicians. The SPEAC System is the first FDA-cleared, non-EEG, physiological, signal-based system for seizure monitoring. Popular Science named the SPEAC System one of the Top 100 Innovations, including a Top 12 in Health, for 2017. It is currently available to the VA market.