It’s time to change the conversation around men’s XL style... 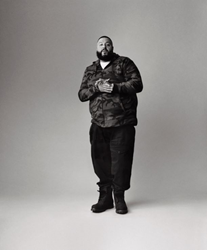 Destination XL Group, Inc. (Nasdaq: DXLG), the leading retailer of men's XL apparel, has launched its newest campaign, titled “Time to XL.” The campaign is a celebration of men’s XL style and centers around five popular celebrities who XL in style. The impressive lineup includes: Music Mogul and Social Media Super Star DJ Khaled; ten-time MLB All-Star David “Big Papi” Ortiz, who has won three championship titles with the Boston Red Sox; Hal Gill, who played sixteen seasons in the NHL (17 years pro) and won a title championship; “Sundance”, singer/songwriter and winner of season 11 of the television music competition, The Voice; and Kelvin Davis, author/model/blogger who is the persona behind Notoriously Dapper, a blog that empowers men of all sizes to look their best.

The message behind DXL’s “Time to XL” campaign is to empower XL men to look and feel their very best. Each of the celebrities featured in the campaign represents what it means to XL in style with complete confidence. These men differ in their individual styles, physiques and achievements – but they all do it in style. “There has been a recent movement in women’s advertising that promotes body positivity,” said David Levin, President and CEO of DXL Group. “It’s time this message is carried over to men as well, and we hope to achieve that with this campaign.”

DXL Men’s Apparel delivers everything men need to XL in style. They are unrivaled in fit, and offer thousands of today’s current looks from over 100 top brands. From value-priced private labels to exclusive designers, DXL’s offering provides style options for all of life’s occasions. Customers can shop their easy-to-navigate website or one of over 200 stores across the country.

The “Time to XL” campaign launched on November 7th via DXL’s digital channels. This was followed by national television and radio broadcasts on November 27th.