Republic receives recognition for its work with the New Orleans based charity Son of a Saint. 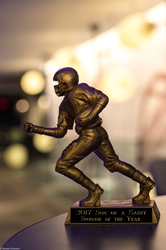 From the commencement of the interviews through their entire time with us, the young men of Son of a Saint were great examples of the benefits of an organization such as Son of a Saint.

Son of a Saint Organization, a New Orleans based charity, recognized Republic Business Credit during its Fifth Annual Gala as one of the Sponsors of the Year.

Son of a Saint’s mission is to support boys through mentorship, education, recreation, camaraderie, cultural enrichment, emotional support and help to fill the void for dozens of fatherless young men in New Orleans.

New Orleans headquartered Republic Business Credit has been a long supporter of Son of a Saint. Republic has sponsored activities with the organization as well as programs such as paid internships during the summer of 2017 for three young men from the Son of a Saint organization. The internship included interviews and full work experience for the mentees.

“From the commencement of the interviews through their entire time with us, the young men of Son of a Saint were great examples of the benefits of an organization such as Son of a Saint,” said Stewart Chesters, Chief Executive Officer of Republic. “They interviewed strongly, had a great work ethic and I personally loved their desire to learn and interact. They were all not only excellent advocates of the organization, but were also for themselves, as very professional young men.”

“It energized our whole team having the boys work with us, while providing them with the insight into working in the financial services industry,” said Danika Louis, Portfolio Manager of Republic. “Our whole team enjoyed having them onboard and this strengthened our resolve to continue to support the work and objectives of Sonny Lee and his team at Son of the Saint.”

“The level of sponsorship we’ve received throughout 2017 has been next-level, and that support has elevated our program to new heights,” said Bivian “Sonny” Lee III, Founder and President of Son of a Saint. “We’re proud to present our 2017 Sponsor of the Year Award to Republic Business Credit, and to acknowledge its generosity, loyalty and unwavering commitment to champion our mission and help our boys. We’re deeply grateful.”

About Son of a Saint
Son of a Saint launched in 2011 to address the burgeoning problem of fatherless boys in the New Orleans area. Under the direction of Bivian “Sonny” Lee, the 501(c)(3) organization is dedicated to its mission of enhancing the lives young males through mentorship, emotional support, development of life skills, exposure to constructive experiences and formation of positive, lasting peer-to-peer relationships. For more information or to get involved, click here.

The company is led by Stewart Chesters, a British transplant to New Orleans who has managed commercial finance companies on both sides of the Atlantic and Robert Meyers, a new business leader in the Midwest and West Coast Regions.

Republic provides paid internships as part of its commitment to being a fair wage employer.