The Hong Kong Polytechnic University (PolyU) today (7 December 2017) organised The Presidents’ Forum, a highlight event of its 80th anniversary celebration. Over 100 global leaders from more than 30 higher education institutions from 20 countries and regions worldwide shared their insightful views at Hotel ICON, the teaching and research hotel of PolyU. 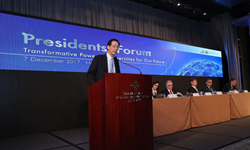 With a topic “Transformative Power of Universities for Our Future”, the Forum aims to provide an opportunity for higher education leaders from various countries in the world to exchange views and inspire each other on how universities can transform the world in view of the current and future global challenges. They also discussed the driving forces for the future of the universities, and how the universities can respond proactively for the public good.

PolyU President Professor Timothy W. Tong said, “This Presidents’ Forum has provided an important platform for leaders of education around the world to share thoughts and experiences on how to shape up a sustainable future through transformative education model and programmes, as well as developing and transferring knowledge that induces change and progress in society.”

Three discussion panels, involving 12 Presidents and 12 senior representatives, were arranged. The speakers shed light on how universities can look to the future and transform society through re-examining their role from a macro perspective, innovating education and research, as well as undertaking impactful knowledge transfer.

The speakers were from all over the world, including Africa, Americas, Asia, Australasia and Europe, of which some are along the Belt and Road regions. Below is the list of the session chairs and speakers (in alphabetical order of the country/region):