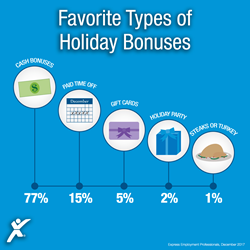 Whether it’s a cash bonus or another gesture of appreciation, showing some ‘holiday spirit’ this time of year can go a long way in enhancing workplace morale and employee loyalty. - Bob Funk, CEO of Express

Chris Ashcraft, who runs an Express Employment Professionals office in Mobile, Alabama, has seen companies give quite the range of bonuses over the years. A local door manufacturer gave employees the last two weeks of the year off—and $75 in after-tax spending money. A construction firm handed out $2,000, while another company gave out frozen turkeys.

While fowl might be a welcome addition to the holiday dinner table, most employees prefer cash, according to multiple Express owners and surveys.

“Holiday bonuses are no more or less prevalent than a few years ago,” said Anne Woods, an Express office owner in Covina, California. “Companies that do those type of things—whether cash, gifts or a dinner—do them in both good times and bad.”

Bernie Inbody, an Express office owner in Omaha, Nebraska added, “They are definitely not becoming more prevalent for the same reason that hourly pay isn’t increasing all that much. Companies are spending more on training, insurance, etc., and thus not investing as much in this area.”

There are differing perspectives on whether bonuses should be merit-based.

“I think all bonuses should be merit-based to encourage good behavior, such as not missing work and being on time,” Ashcraft said.

Janis Petrini, an Express office owner in Grand Rapids, Michigan, said merit-based is not usually the trend, though.

“Most companies look at the holiday bonus as something that everyone gets or no one gets,” she said. “The dollar amount may depend on the person’s length of services or performance, but everyone will receive something.”

Inbody sees the upside of both approaches.

“I think merit-based bonuses are most appropriate, but blanket ones are easier to administer,” he reasoned.

“Whether it’s a cash bonus or another gesture of appreciation, showing some ‘holiday spirit’ this time of year can go a long way in enhancing workplace morale and employee loyalty,” said Bob Funk, CEO of Express, and a former chairman of the Federal Reserve Bank of Kansas City. “Plenty of businesses may not be in a position to give bonuses. Those that do, though, are not only spreading some cheer but also some good will, which is always a wise investment.”

The survey of 300 employees was conducted through Express International Headquarters.