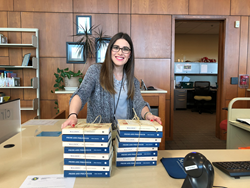 Donations made to local school libraries

The Crossvine is pleased to announce that the mixed-use, master-planned community in Schertz, Texas has donated over 50 of copies of custom-designed editions of Walden and Pride & Prejudice to schools in the Schertz area. The donation is the second from the area community, complementing a 2015 initiative that brought Peter Pan and The Secret Garden to area schools and the Schertz Public Library.

“We originally started this program as a way to engage residents of The Crossvine with the lending libraries that we’ve constructed throughout our community – but we are happy to be able to promote the adventures of reading in the greater Schertz area as well.” said Chris Price, developer of The Crossvine. “Over the past couple years, we’ve looked to foster a strong sense of community and connectivity throughout The Crossvine and Schertz, and these books are a part of that mission.”

The seed for the collaboration on this project between The Crossvine and lookthinkmake, the creative agency for The Crossvine, began with Price’s idea to build lending libraries for residents of the neighborhood. That idea eventually grew into lookthinkmake creating a series of custom-designed covers for books in the public domain, printed through “The Crossvine Press,” with each cover specifically designed with its own personality, and an aesthetic linked to the look, feel and experience of The Crossvine community.

For example, for lookthinkmake designer Gwen Donovan, Henry David Thoreau’s own words – Live in each season as it passes, breathe the air, drink the drink, taste the fruit, and resign yourself to the influence of the earth – inspired her vision for the layout for the Walden cover. “This project has been incredibly fun to work on,” she said. “Not only because we got the chance to promote literacy and to create a one-off piece of art, but it’s inspiring to work with someone like Chris who says yes to our craziest ideas, and wants to do unique things.”

As the Crossvine grows, Price continues to invest in the community in ways that are unique for a developer. His attention to detail and the intentional planning that went into the design and development of the master-planned community extends to resident- and community-oriented initiatives, such as curated welcome baskets featuring Crossvine wine that new residents receive when they close on their new home, to this custom book initiative.

The Crossvine’s book donation also complements a number of other community-focused initiatives designed to engage and foster long-lasting valuable interaction between The Crossvine and the surrounding area. For the past two years, The Crossvine has been the lead sponsor for the City of Schertz’s Movies in the Park series, bringing family-friendly films and themed activities to the residents of Schertz; and The Crossvine has given support to a number of military-focused nonprofit events, including the 2016 San Antonio Veterans Day Run and 2017 DAV 5K.

Since breaking ground in 2013, The Crossvine has become an important part of the Schertz landscape, and The Crossvine development team has worked closely with the City of Schertz to create a community that responds to the market and to the future vision of the South Schertz area. “The Crossvine is proud to call the city of Schertz home, and we are committed to being good neighbors and to bringing true value to this community,” said Price.

To learn more about The Crossvine, visit their website: https://www.thecrossvine.com/