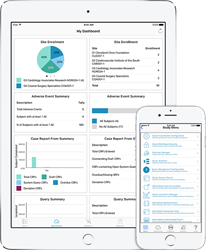 The biggest difference between the two technologies, is 98 percent of what is needed to conduct regulatory compliant research is available out of the box with TrialKit. With ResearchKit, that must all be developed from scratch...

In 2015 Apple launched ResearchKit® - a powerful tool to deploy clinical research in a mobile world. Up until about six months ago, Apple’s ResearchKit was the only sound and high tech option if you wanted to conduct clinical research in a strictly native mobile environment. In May of 2017, Crucial Data Solutions, Inc. (CDS) released TrialKit™ - designed to eliminate the need for software and database developers, while at the same time creating entirely regulatory compliant research studies that run on 99 percent of the world’s smartphones and tablets.

Below, we compare the capabilities of the two systems:

TrialKit has greatly eased the process of building, deploying, and managing clinical research studies. Simply download the app, complete five fields, and you have a fully functioning system. From the TrialKit website, you can sign up for free instructor-based training. CDS recommends everybody take a 30 minute orientation course, but users have access to as much training as they need from certified instructors with a tremendous understanding of clinical research.

Once you have registered, you can create your first study in minutes. That first study contains a powerful set of defaults and even sample case report forms complete with advanced business logic and other items that will make your study regulatory compliant.

With ResearchKit, the first step is to download Xcode. If you are not a software developer, then really the first step is to go out and hire one. iOS developers do not come inexpensively and there are literally thousands of iOS developer job openings, so this step may be more difficult than you expect. Certainly, it will be a spendy endeavor. Of course, that is only to develop a UI; you will need additional developers to create a regulatory compliant WebAPI and model a regulatory compliant database and tie it all together.

With TrialKit, this all comes in the box. TrialKit is the next logical progression of a web-based eClinical system named Clinical Studio. The developers at CDS have been creating tools that allow medical professionals to build their own studies for decades. TrialKit has an incredible drag-and-drop interface for doing virtually everything. In addition, TrialKit is so highly configurable that you can create very simple survey studies on up to the world’s most complex oncology studies.

Within the clinical research industry, TrialKit is the only complete eClinical system developed as a native mobile app in both iOS and Android. If you want to see how it stacks up against the leaders, CDS publishes an exhaustive list of eClinical features along with two leading systems:

We asked CDS President Paul Grady why ResearchKit was not included in this comparison. Although very reserved, he had this to say, “ResearchKit is a software development environment and out of the box has literally no features. They have to be developed almost completely from scratch. We did not feel as though it would be fair to publish what ResearchKit can do out of the box. In addition, ResearchKit is not targeted to be a 21 CFR Part 11 compliant environment, which means technically it is not an eClinical system.”

Ironically, Grady went on to explain that CDS implemented into TrialKit several excellent ideas that came as suggestions from the ResearchKit team. He went on to compliment many of the studies that have been done in ResearchKit, but cautioned sponsors by saying this: “ResearchKit studies are excellent. They tap into some very important technology that is part of today’s mobile devices. However, TrialKit - through activity testing technology - can implement the same types of diagnostic procedures. Once added to TrialKit as an activity test, the diagnostic procedure can be then added to any study in a protocol compatible visit CRF. The biggest difference between the two technologies, is 98 percent of what is needed to conduct regulatory compliant research is available out of the box with TrialKit. With ResearchKit, that must all be developed from scratch, which makes ResearchKit cost prohibitive to all but the most wealthy companies.”

We asked Grady if, in his opinion, TrialKit makes ResearchKit obsolete. He responded, “No, we do not feel as though that is the case. It is obsolete if you are not a huge research organization, because you simply cannot afford it. The two technologies could work side by side one day, who knows? My biggest concern is if you can conduct a research study for X with TrialKit, why would anybody pay 100X to conduct the same study with ResearchKit? We feel as though that really inflates the overall cost of research and, as a result, the overall cost of healthcare which will be detrimental to future research and healthcare subscribers.”

About Crucial Data Solutions, Inc.
Crucial Data Solutions, Inc. is a forward-thinking company dedicated to developing innovative technologies that reduce the cost of medical research by equipping clinical professionals with the tools they need to advance treatments that enable patients with life-altering conditions to lead better lives. We believe clinical research should be a true partnership between ourselves, research professionals, caregivers, and patients worldwide.

Android is a trademark of Google LLC.