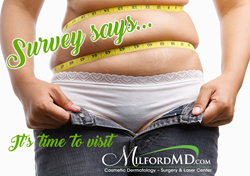 As demand for body contouring has grown, so have options. Today’s consumer can pick from a menu of safe & effective procedures, including noninvasive fat freezing with CoolSculpting to modern liposculpting with SmartLipo or using power-assisted lipo (PAL)

Consumer demand for body contouring procedures, including noninvasive options to liposuction, has increased 2.5-fold in the last five years, according to the latest American Society for Dermatologic Surgery (ASDS) Survey on Dermatologic Procedures. The increasing demand mirrors consumers’ concerns, according to ASDS. Those responding to the survey for the last four years have indicated that excess weight is their biggest cosmetic concern. In fact, body sculpting treatments, including fat freezing with CoolSculpting, shot up more than 76 percent last year, the survey indicates.

“As demand for body contouring has grown, so have the options,” says cosmetic surgeon Dr. Richard Buckley, medical director at MilfordMD Cosmetic Dermatology Surgery & Laser Center, in Milford, Penn. “Today’s consumers can pick from a menu of safe and effective procedures, including noninvasive fat freezing with CoolSculpting to modern laser liposculpting with SmartLipo or using power-assisted liposuction (PAL).”

MilfordMD is a CoolSculpting Certified Practice, meaning the physicians and staff have demonstrated a comprehensive understanding of how the CoolSculpting technology and procedure work. “We were among the first practices in the area to offer CoolSculpting and have since upgraded the device to include the latest technology,” Dr. Buckley says. “Whereas it used to take about 60 minutes to treat a pocket of fat, today, it takes about half the time and we can also double the number of treatments that can be performed at one time because we offer DualSculpting, meaning we have 2 CoolSculpting devices.”

It’s important that consumers understand the differences between a procedure that doesn’t require surgery or an incision and a body sculpting option that does. CoolSculpting, he says, is an FDA-cleared nonsurgical procedure, which is an ideal option for treating small areas of unwanted fat. “We can successfully treat fatty areas under the arms, around the abdomen, thighs and knees. With the CoolMini device, we can also treat a double chin,” he says.

What CoolSculpting isn’t is a weight-loss procedure. Results from fat freezing are noticeable but subtle. And after a series of treatments, most patients notice the full effect of treatment in the months following treatment, he says.

For people who are looking to transform the shapes of their bodies and lose considerable fat, traditional approaches to liposuction will help them more realistically reach their goals, according to Dr. Buckley. “That includes my preferred bodysculpting procedure laser liposculpture, which offers more dramatic results,” Dr. Buckley says. Fat reduction, including SmartLipo Triplex, PrecisionTx and ProLipo, using lasers can remove as much as a gallon of fat with each liposculpture appointment. The tradeoff for the more dramatic results is some downtime. Patients generally are asked to wear a compression garment for a week or two and they should rest for at least a day though many patients do return to work the day after their liposculpture procedure.”

The survey also reveals consumers’ growing demands for minimally invasive treatment options, such as Kybella, to treat fat under the chin, and microfocused ultrasound, like Ultherapy, for skin tightening.
Of the 387,000 total body contouring procedures performed by ASDS surgeons last year, nearly 10 percent were Kybella and 33,000 were microfocused ultrasound.

Kybella is a nonsurgical FDA-approved injection treatment aimed at permanently removing double chins, to restore the neckline. The injectable is a naturally occurring molecule, called deoxycholic acid, which dissolves localized fat cells. An example of microfocused ultrasound is Ultherapy, which noninvasively uses ultrasound technology to lift and tighten skin.

“Sometimes, we’ll use a combination approach to address all a patient’s body contouring, including treating fat pockets with CoolSculpting and treating loose skin or cellulite,” Dr. Buckley says. “The good news for patients is that we can get them vacation-, reunion-, and swimsuit-ready with or without surgery or downtime.”